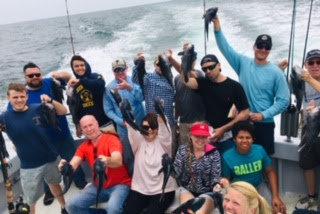 Reservations Required at 410 520 2076 - LEAVE YOUR BEST POSSIBLE CONTACT NUMBER - Weather Cancelations Are Common - I Make Every Attempt To Let Clients Sleep In If The Weather's Not Going Our Way..
Be a half hour early! We always leave early!
..except when someone shows up right on time.
Clients arriving late will see the west end of an east bound boat. With a limited number of reserved spots, I do not refund because you over-slept or had a flat..
Bonine Is Cheap Insurance! "Natural Dramamine" Does NOT Work!
It's Simple To Prevent Motion Sickness, Difficult To Cure.  If You Suffer Mal-de-Mer In A Car You Should Experiment On Shorter Half-Day Trips First..
Bring A Cooler With Ice For Your Fish – A 48 Quart Is Fine For A Few People.
No Galley! BYO Sandwiches & Soft Drinks. A few beers in cans is fine. (bottles break at bad times)
If You Won't Measure & Count Your Fish The State Will Provide A Man With A Gun To Do It For You. We Measure & Count — ALWAYS — No Exceptions!
http://www.ocreefs.org
We're Nowhere Near Reef Building's True Potential.
If you have a few blocks in the backyard taking up space and just making snake reef, bring em. We'll toss em overboard with the rest. 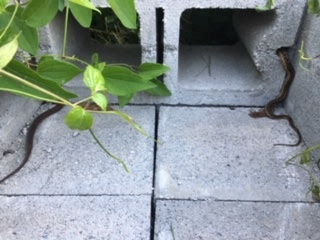 Hit the 25,000 mark on 5/25/19.. Here "Reef Report 5/26/19" from ocreefs.org email...
Mates Vance Atkins of Frankfort DE & Cody Gallien of Laurel DE pushed reef block #25,000 by the rail on Saturday, May 25th.
Take a couple dozen reef blocks most days; only a dozen/16 if they're 100 pounders.
Sure doesn't seem like much from a day to day view. Adds up.
We use reef blocks to bolster production & coral growth on low-profile artificial reefs such as barges or concrete that has scoured into the bottom—use existing reef as substrate for our block units. Also use blocks to 'tie together' two smaller reef units that are close together. One such reef-set is an M60-A1 Abrams tank & an APC from the Army's "Operation Reef Ex" sunk in 1994. Only 60 feet apart; before summer's end they'll be joined into a single reef.
Today's blocks were dropped on the Benelli Reef at Jackspot. (Benelli USA of Accokeek VA donates a fine firearm for OCRF's annual reef raffle every year.)
All block piles are listed with accurate coordinates on Ocean City Reef Foundation charts.
Every reef built, be it 500 tons of concrete we deployed May 17th for the Will Hathaway Memorial Reef, or couple thousand reef blocks; every bit creates an addition to our coast's hardbottom habitat—a place where corals can grow & fish can spawn.
Visit ocreefs.org if you'd care to help build even more.
Regards,
Monty
OCRF 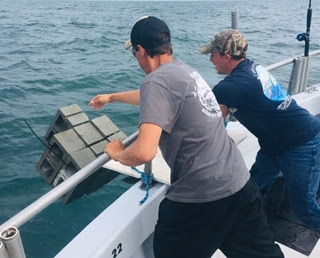 25,295 Reef Blocks have been deployed at numerous sites as of 6/15/19..
Here are sites currently being targeted: Capt. Jack Kaeufer's Reef 787 - Doug Ake's Reef 3,780 - St. Ann's 2,234 - Sue's Block Drop 737 - TwoTanks Reef 532 - Capt. Bob's Inshore Block Drop 900 - Benelli Reef 840 - Rudy's Reef 160 - Capt. Bob's Bass Grounds Reef 1,450 - Wolf & Daughters Reef 688 - 302 at Al Berger's Reef.
Greetings All,
Sea bass fishing continues to produce good catches, if not as many limits as we had earlier in the season. Some limits some days, but in summer if I get a few clients into double-digits — Success. Today, Father's Day, we have some clients across that line. Had a decent bite after a slow start.
We've also seen the first few flounder. I do mean few! Like "3 keepers altogether" few. I've had several die-hard flounder enthusiasts suffer disappointing result by trying to catch fluke (aka summer flounder) while everyone else was boxing up sea bass in good number. "Boy, sea bass sure bit light today," said a man targeting flounder all day -- this while a first time angler using a rental rod bagged out on sea bass.
Fluke will let us know when its time to target them on our reefs/wrecks. We'll see more of a flounder/cbass mix as June ambles by; and then, one day later this month, a solid bite of fluke with just a handful of sea bass. Perhaps early July instead.
It's a sure bet I'll have clients trying hard for sea bass become disappointed, 'Boy, cbass just didn't bite today,' while anglers pose with nice catches of flounder...
Happens every year. Fish for what's biting!

Something that does NOT happen every year - that's never happened before that I'm aware of - is a new request by NOAA for comments on our recreational catch estimates' accuracy.
Say NOAA, you really want to know what we think?
I'll not keep my thoughts a secret. It is my sincere hope readers will also chime in with a comment..
https://www.fisheries.noaa.gov/feature-story/call-public-comment-recreational-fishing-survey-transition-policy
"Public comment on Policy Directive 04-114 should be sent via email to nmfs.mrip@noaa.gov no later than midnight on Monday, July 22, 2019."
A simple sentence or two about your (lack of?) faith in the catch data, or what you think of monies long invested (or wasted!) in the program; perhaps what you think a likely outcome of "science based regulation" ..when fisheries science is force-fed statistics from the rubbish heap.
Like that.
A very short letter will suffice. Even: "No, MRIP is NOT ACCURATE enough to support sound Fisheries Science & Management."
Angry is OK. Expletives are not.
I believe our area of ocean, the Mid-Atlantic, is capable of far greater fisheries production. We'll never grasp the management necessary to achieve increased spawning & habitat production so long as fisheries science & regulation are founded upon wildly incorrect recreational catch data from NOAA's MRIP recreational catch estimate program.
For this "comment period" NOAA specifically wants to know if the Marine Recreational Information Program (MRIP) meets standards set in the "Information Quality Act" and is suitable for use as 'Best Available Scientific Information' for regulation/management of our fisheries as required by the Magnuson Stevens Act...
Personally, I don't think MRIP meets any standard for accuracy. Our estimates are instead a complete fabrication. Everytime I think MRIP cannot possibly be more inaccurate, up it goes to a new plateau of ridiculousness. (Why sure I'll give you some examples of exactly what I mean by that.. See below!)
I was among some few anglers who fought for MRFSS's repair (NOAA's previous recreational catch estimate program) in the late 1990s/early 2000s. We'd have never dreamt  they would make MRFSS look like the better method.
Seriously - MRFSS was awful.
MRIP, however, makes me long for the good old days..