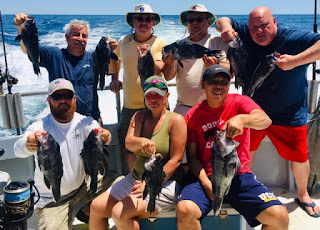 Reservations Required at 410 520 2076 - LEAVE YOUR BEST POSSIBLE CONTACT NUMBER - Weather Cancelations Are Common - I Make Every Attempt To Let Clients Sleep In If The Weather's Not Going Our Way..
Be a half hour early! We always leave early!
..except when someone shows up right on time.
Clients arriving late will see the west end of an east bound boat. With a limited number of reserved spots, I do not refund because you over-slept or had a flat..
Bonine Is Cheap Insurance! "Natural Dramamine" Does NOT Work!
It's Simple To Prevent Motion Sickness, Difficult To Cure.  If You Suffer Mal-de-Mer In A Car You Should Experiment On Shorter Half-Day Trips First..
Bring A Cooler With Ice For Your Fish – A 48 Quart Is Fine For A Few People.
No Galley! BYO Sandwiches & Soft Drinks. A few beers in cans is fine. (bottles break at bad times)
If You Won't Measure & Count Your Fish The State Will Provide A Man With A Gun To Do It For You. We Measure & Count — ALWAYS — No Exceptions!
http://www.ocreefs.org
We're Nowhere Near Reef Building's True Potential.
If you have a few blocks in the backyard taking up space and just making snake reef, bring em. We'll toss em overboard with the rest.
25,420 Reef Blocks have been deployed at numerous sites as of 6/15/19..
Here are sites currently being targeted: Capt. Jack Kaeufer's Reef 787 - Doug Ake's Reef 3,780 - St. Ann's 2,259 - Sue's Block Drop 737 - TwoTanks Reef 582 - Capt. Bob's Inshore Block Drop 900 - Benelli Reef 865 - Rudy's Reef 185 - Capt. Bob's Bass Grounds Reef 1,450 - Wolf & Daughters Reef 688 - 302 at Al Berger's Reef.
Greetings All,
Have had some limits of sea bass this week. That's pretty unusual for mid/late June. Dern sure nowhere near a boat limit, but plenty OK for a summer bite. I sure hope to send clients home with at least a fish fry!
Last year I whined about losing more days in June than ever before.
That'll teach me.. We've lost 50% more days this June than last; days I had to cancel for wind.
Great Scott..
Still, some real pretty days in there too. Fishing's OK with some clients in double digits - even a limit or two now and again..
Reef sponsorship is up at the Ocean City Reef Foundation. No salaries, all expenses kept to a minimum; we're putting sponsors' monies into building up our reef sites. This year we've already sunk a 130' barge & deployed the largest single bargeload of precast concrete in the Foundation's history - 500 tons at a reef we built in honor of Capt. Will Hathaway.
Now comes a project I've long envisioned—a boulder reef. What could be better than the substrate nature builds reefs with herself?
Believe me, there are plenty in the management & environmental communities who hate artificial reef in any form. This owes primarily, I believe, to the failed mosquito control project of the mid/late 1970s when millions of tires were banded with plain steel and sunk as reef. I don't know about the west coast, but these reefs were deployed in large number from Texas to New York. Wasn't long and the bands had rusted out and tires were washing ashore by the tractor trailer load.
Yup, if you were in college or just starting a career in marine science/fisheries in the 70s or 80s - artificial reef stunk then and still does.
A few years ago I was fortunate to have underwater videographer Nick Caloyianis aboard for a reef monitoring trip. I was hoping to get sharp pictures of our best coral growths on artificial substrates off Ocean City ..and did.
Only it wasn't an old clam boat as I'd been told for decades - it was one of very few surviving tire reefs from that mosquito control program of yore. Maybe the only one above Hatteras? 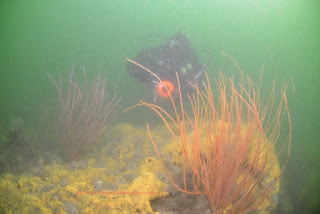 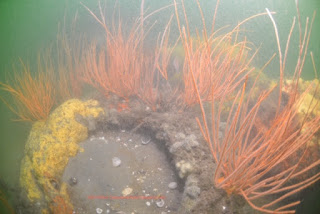 Had the tires of that era been weighted with concrete instead of compacted with plain steel banding, there'd be billions of tons more Coral growing along the US East Coast..
Tires long since banned, we push ahead against long and deeply held prejudices from within management.
It is my sincere hope even the haters will one day see the benefit of restored coral fish habitat.
Charlie Dolbey and Jeremiah Kogen of Murtech Marine Division have been the muscle behind many of our recent projects.
We're going to truck 500 tons of small boulder into Murtech's Salisbury yard for a single bargeload deployment at the Bass Grounds some 9 miles off Ocean City, MD. 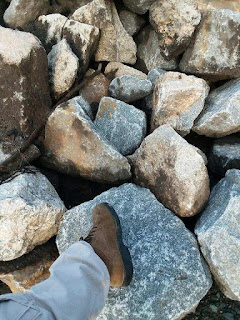 Already have 100 tons on site.
Going back to the 1950s, 60s, & early 70s the Bass Grounds were just that — a huge natural reef where men, w/o aid of modern navigation, could run a simple compass course and drift for sea bass.
As I was told by one old time partyboat skipper: "Once the porgy (scup) run was over we'd fish the Bass Grounds for sea bass. Some years that bottom would carry the fleet right into mid/late August when seatrout (weakfish) would show. Very rarely would we have to go to the bottom (reef bottom) outside the second or third lumps."
Several have described "a sea of flags" meaning bass traps/pots in large number. I've fished around traditional bass traps for 40 years - that gear doesn't destroy reef bottom.
Many have described to me how it was lost to the surfclam boom of the 1970s when multi-ton dredges from fifty and more clam boats sailing just from OC supplied Howard Johnson's with clam strip sandwiches in vast nationwide number. In 1981 Ward Brex, who owned The Mast restaurant and skippered the Party Boat 'Taurus,' summed it up to me thusly: "We had the best sea bass fishing on the coast and we let them destroy it."
Well, let's put it back.
It really is as simple as rolling rocks off a barge.
Derned if that doesn't cost some coin, but we're making it happen.
If you'd care to help,  visit ocreefs.org - if you already are, Thank You!
On a separate front, I absolutely believe oyster restoration efforts in our region's estuaries have the potential to turn our now-green Mid-Atlantic waters blue again. Many .orgs are in hot pursuit of that victory including CCA MD, CBF, & TNC.
In the ocean, however, ignorance still reigns supreme. "Coral Reef Restoration" in the Mid-Atlantic isn't on anyone's radar that I know of. Until it is we'll keep doing the best we can with our little nonprofit.
It's already making a difference. 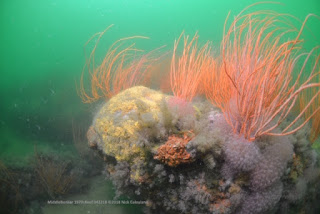