Sailing Daily For Sea Bass - Weather Permitting (Sakes!) - Saturday's 6:30 to 3:30 - $125.00 –Otherwise 7 to 3 at $110.00..
Fishing's been kind. Some have a limit of sea bass most everyday. Have lots of spots open. Even some Memorial Day weekend..
Reservations Required at 410 520 2076 - LEAVE YOUR BEST POSSIBLE CONTACT NUMBER - Weather Cancelations Are Common - I Make Every Attempt To Let Clients Sleep In If The Weather's Not Going Our Way..
Be a half hour early! We always leave early!
..except when someone shows up right on time.
Clients arriving late will see the west end of an east bound boat. With a limited number of reserved spots, I do not refund because you over-slept or had a flat..
Bonine Is Cheap Insurance! "Natural Dramamine" Does NOT Work!
It's Simple To Prevent Motion Sickness, Difficult To Cure.  If You Suffer Mal-de-Mer In A Car You Should Experiment On Shorter Half-Day Trips First..
Bring A Cooler With Ice For Your Fish – A 48 Quart Is Fine For A Few People.
No Galley! BYO Sandwiches & Soft Drinks. A few beers in cans is fine. (bottles break at bad times)
If You Won't Measure & Count Your Fish The State Will Provide A Man With A Gun To Do It For You. We Measure & Count — ALWAYS — No Exceptions!
http://www.ocreefs.org
We're Nowhere Near Reef Building's True Potential.
If you have a few blocks in the backyard taking up space and just making snake reef, bring em. We'll toss em overboard with the rest.
24,920 Reef Blocks have been deployed at numerous sites as of 5/21/19..
Here are sites currently being targeted: Capt. Jack Kaeufer's Reef 787 - Doug Ake's Reef 3,755 - St. Ann's 2,234 - Sue's Block Drop 712 - TwoTanks Reef 432 - Capt. Bob's Inshore Block Drop 900 - Benelli Reef 763 - Rudy's Reef 135 - Capt. Bob's Bass Grounds Reef 1,375 - Wolf & Daughters Reef 688 - 252 at Al Berger's Reef. 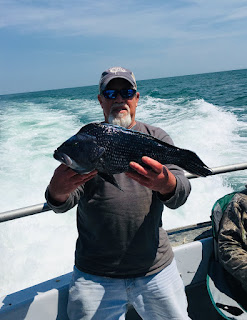 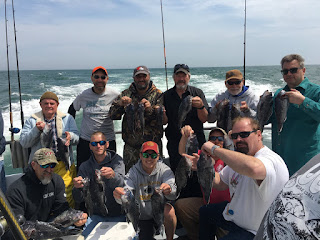 Greetings All,
Have had a fine start to our sea bass season. Everyday we have had some clients limited; more than half the boat a couple times too.
Opening day weatherman threw us a curveball. Blew a switchy N 20 to 25 w/gusts instead of 10-15..
Wind died about 10:30 though. By the time we headed in it was calm.
Pretty sure I set an unpleasant record for most seasick aboard.. Those who could fish were mostly limited out on sea bass.
Witnessed a classic bit of fisherman's luck then. A couple, (we'll call them "George & Lucy" to protect both innocent & vanquished) were fishing the stern. George never left the rail - fishfishfish. Lucy wasn't liking the weather one bit and mostly stayed in the bunk. But when she did drop a line - Bam! Nice ones.. I guarantee she had more of, & the biggest of, their 30 cbass limit. We had fun with it. Not sure "George" did!
Now 6 days in, even Tuesday, May 21st - when I had to come in 2.5 hours early for wind & building seas - we put a nice catch together. Had several regulars tell me it was the best bite they'd had in years
..but, boy was it rough!
Been pretty days too.
Try to spend them catching.

For over a month last winter I asked readers to write anyone & everyone associated with Fisheries to complain about NOAA's MRIP recreational catch data.
Know what? We got in.. Received a note from NOAA Under-Secretary Adm. Gallaudet stating: "Monty, I couldn't agree with you more."
Not positive it'll become real progress. Hope so. Landing on the boss's desk is one thing - pushing through real change another. Wishbone doesn't replace backbone..
Thought we'd put the whole thing to bed with the 2007 re-write of Magnuson - the law that controls US Fishing. Instead, NOAA has used MRIP to make recreational fishing look more dangerous to fish populations than factory trawlers of yesteryear.
Really. Today's catch estimates routinely show Private Boats from one state killing more fish in a few weeks than all commercial & party/charter catch - All Year!
Every fishery is different. But for every fishery that's targeted by For-Hire skippers in Party/Charter, there is a typical split between what we and Private Boats catch. Because Party/Charter have to surrender a catch report for every trip, having a rough idea the percentage split would give managers a pretty good estimate of total catch--far better than MRIP's hogwash.
As it stands today MRIP is forever showing For-Hire at sub-5% of popular Party/Charter fisheries such as summer flounder/tautog/& sea bass.
MRIP holds For-Hire boats as nearly inconsequential—and NOAA knows almost exactly what we catch - we have to tell them everyday.
Maryland's Private Boats, for instance, often catch far more sea bass (by MRIP's telling) than Maryland Party/Charter. They'll outfish us 5 to 1 -- even 20 to 1 -- on a computer screen.
But away from MRIP's data sets - out in the ocean - during the first 3 days of sea bass season we kept an eye out: of approximately 550 anglers on 4 partyboats & 2 charters, we saw fewer than 25 Private Boat anglers. Saturday saw a bit more private boat effort but every partyboat was sold out & fishing was excellent.
Sunday I had 5 Private Boats fishing nearby--more than I'd seen this season combined. Several obviously knew what they were doing. Others, not so much. There were still more people on my little partyboat than on that mini-fleet of Private Boats combined.
There are, of course, Private Boat guys who can - and do - whack some sea bass. Point is, there could never be even 20% of MD's sea bass caught by Private Boats in May/June.
What's MRIP tell fishery managers? A far different representation, I promise.
2011 - Party/Charter 19,200 lbs of sea bass averaging 1.25 lbs VS 121,800 lbs of avg 3.6 lb cbass for Private Boat. Here Private lands 6.4 lbs to 1 lb For-Hire. Uh Hu...
*
In 2012 Private catches 7 cbass to Party/Charter's 1.. AhYup.
*
In 2013, 14, & 15 Private Boats apparently gave up sea bass fishing in May/June - entirely. Private Boats are shown to catch none. (Though some Private Boats certainly do catch sea bass, these zeros are a far better representation of actual catch rather than MRIP's typical wild statistical blow-out.)
In 2016 we're back to Private outfishing Party/Charter by 5.3 to 1..
*
In 2017 it's 7 to 1 Private Boats' favor, & in 2018 they again loose interest and catch none.
..Then, of course, there's Sept/Oct 2017 when MD Shore anglers "caught" more sea bass (avg 1.4 lbs from SHORE!) than MD Party/Charter catch in 3 years.
The data's plenty smelly.
Corrected, recreational catches will drop by millions of pounds.

People at the top of this MRIP program make big money. Amazing how they've mislead fisheries science & management and gotten away with it.
When you see "recreational overfishing" in an article, this is where it comes from.
We have to put this fire out. We MUST get the record corrected. (If you'd like to make comment, please read a few of my recent previous Fish Reports at morningstarfishing.com )

A far better strategy for rebuilding fish populations of yesteryear, and not something we ought wait around and see if NOAA's interest might begin: Build reef! On 5/17/19 that 500 ton bargeload of precast concrete finally made it to the Bass Grounds - Capt. Will Hathaway's Memorial Reef is complete.
Maryland does not have a marine reef building program. The top of NOAA, save very few, are wholly unsure if they should even allow reef building.  We build reef with our small 501c3 non-profit, the Ocean City Reef Foundation.
No salaries - no office rent. Monies raised go to reef building with some to reef monitoring, accounting, and fund raising.
People -mostly fishers & divers- donate because they can see it working. Mussels & various other growths colonize new substrates almost immediately. Anglers catch on our constructions even in the first year..
The real benefit comes in addition - Additional Habitat - an expanding footprint of hardbottoms where corals can grow, where fish can spawn.
And are.
ocreefs.org (web) & Ocean City Reef Foundation on FaceBook..
A project that makes a difference.