Fish Report 12/11/19
More Sea Bass Trips - Long Trips!
A Huge Win For Recreational Fishers
..gives MRIP a black eye
LONG** Sea Bass Trips - December Fri 13th - Sat 14th (rain in early AM then clearing) - Monday 16th - Fri 20th - Sat 21st - Sun 22nd - All Trips Sea Bass - 6AM to 5 PM - $140.00 - Limit 20 Anglers (eliminating 5 spots - 3,7,13,17, & 23 for even more room fishing..)
Reservations Now Open. No Fishing Christmas Day.
(**Seriously - I mean LONG runs! Seabass Are Moving Offshore! Don't like a long boat ride? Don't Go!)
Gift Certificates in time for Christmas? Sure! Call the reservation line.. They can all help but Anna works 8 to 3 weekdays - she's writing them.
Will Begin Announcing Tog Trips Soon In These Reports.
Lots & Lots of weather cancellations lately. Right pain in the neck! Have a reservation? Keep your phone on & Check Messages!
When we CAN get out, however, sea bass fishing's been kind. We're still allowed 15 cbass at 12.5 inches along DelMarVa. Catching Lots of Limits - Even a limit of jumbo cbass 12/8...
Going Sea Bass Fishing Everyday Possible! NOT Togging Yet. (Yet..)

Reservations Required at 410 520 2076 - LEAVE YOUR BEST POSSIBLE CONTACT NUMBER - Weather Cancellations Are Common - I Make Every Attempt To Let Clients Sleep In If The Weather's Not Going Our Way..

Be a half hour early! We always leave early!
..except when someone shows up right on time.
Clients arriving late will see the west end of an east-bound boat. With a limited number of reserved spots, I do not refund because you overslept or had a flat..

It's boots season! Fishing the back half of the boat? Waterproof boots highly advised unless flat calm..
Bonine Is Cheap Insurance! "Natural Dramamine" Does NOT Work!
It's Simple To Prevent Motion Sickness, Difficult To Cure.  If You Suffer Mal-de-Mer In A Car You Should Experiment On Shorter Half-Day Trips First..

Bring A Cooler With Ice For Your Fish – A 48 Quart Is Fine For 2 People. We have some loaner coolers aboard - You'd Still Need Ice.
No Galley! BYO Sandwiches & Soft Drinks. A few beers in cans is fine. (bottles break at bad times) 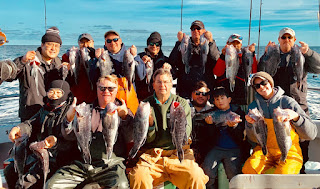 Greetings All,
My last trip out (12/8) we stopped where I'd caught very well a few days before - Ugh! After just a few minutes I could see the writing on the wall. Picked up anchors and paddled offshore further still.
All told, it was a long run. Not running her hard. We'll get there.
At the second spot I had about half my clients limited on jumbo sea bass inside an hour. That's pretty fishing. When all finished one of my crew was 3 fish short his limit. That made him low man.
Beautiful, thick fillets..
Hope to do it again & again!

Long time readers know I've been complaining about NOAA's recreational catch estimates since forever. What insanity to call these our "best available scientific information."
There's a 'Joint Meeting' of Fisheries Council/Commission going on now in Annapolis that concludes 12/12/19..
Our bluefish limits are dropping from 15 to 5 it seems. A size limit of 14 inches will be coastwide too - possibly.
That's the bad news.
The good news is both Council & Commission agreed to "Status Quo" on black sea bass, scup, & summer flounder -- same regs as last year. Not "Great News", but a dern sight better than it might have been. Had NOAA's catch data been used 'as is' - many recreational fishing businesses, including mine, would have gone belly up in 2020.
Yet MRIP's recreational catch data did show MASSIVE overfishing by Shore & Private Boat anglers. They could have nearly closed all three recreational fisheries, I suspect, and been following the letter of the law.
But management didn't.
First I've ever seen it.
They didn't tighten the noose because, at long last, this grand group of regulators has expressed "No Faith" in MRIP's recreational catch estimates.
(have so much more to come on this..)
We MUST capitalize on this moment, this meeting where regulators agreed, essentially & nearly unanimously, 'We Cannot Regulate Fairly Based On This Very Bad MRIP Catch Data.'
I will be sending out another major report soon detailing points readers might wish to tell their Congressional & State Reps about.
Now, DC's a pretty busy place. We'll have to land A LOT OF LETTERS to get their attention.
For Years & YEARS I have worked on this rubbish NOAA calls their 'best scientific information.' There's never been a time before when Regulators could be shown to agree that it really is bad data.
Now we can.
This is our moment. We have to go for regulatory change By Law like an MMA fighter who sees his opponent slip. Has to happen Now. Pummel. Choke Hold. Force NOAA to Tap Out with their  ridiculous recreational catch estimates from MRIP.

We can't just "get rid of it" some will say. Yes we can too. Easiest way to make a quick repair is to simply return to the method of calculating recreational catch before MRIP (Marine Recreational Information Program) began in 2012 -- namely the MRFSS program. (Marine Recreational Fishing Statistics Survey)
MRFSS was awful. MRFSS' errors -Huge- were why we lobbied for repairs to For-Hire (Party/Charter catch estimates) and won in 2003. Then, eventually, Private Boat & Shore catch estimates in 2007 ..but that congressionally mandated repair failed utterly--MRIP. The program we begged Congress to help us escape--MRFSS--was a dern sight better than this MRIP garbage.
I believe we'd get closer to the truth still with my 'Percentage of the Catch' method. That idea has gathered no champions though. Simply switching back to MRFSS will save both Recreational AND Commercial fisheries much anguish.
Indeed, reallocations of shared species based on MRIP will all but shut down many commercial fisheries in just a few years. But we recs will have gone under first.
Yes, I'm serious.
There's no possible way to regulate fairly, or calculate fishery restoration strategies wisely, with catch data as bad as MRIP's.
In MRIP a single state's shore fishers can catch & kill more fish than All Party/Charter from Hatteras north. A single state's Private Boats will, quite often actually, outfish All Party/Charter & ALL Commercial -- sometimes catching more sea bass, for instance, in just a few weeks than all For-Hire Recreational All Year..
It's Nuts.
Time to kill it before it kills us.
I've included 2 tables below from the scup fishery - One is just Massachusetts, the other from Virginia north. I've never talked to anyone who didn't think Partyboats really had the highest recreational landings. You can see where MA Shore has higher landings than All Party/Charter - and where Private Boats just beat the Partyboat fishery all to pieces - except that's not what really happens.
See my piece "Fish Report 11/17/19 Grand Theft Fisheries" at  http://morningstarfishing.com/report.htm for a deeper look - there's a link there for addresses too.
We must not allow MRIP back up off the mat..
Regards,
Monty

Scup Virginia North (2019 only through August)