Reservations Required For ALL Trips at 410 520 2076 - LEAVE YOUR BEST POSSIBLE CONTACT NUMBER - AND CHECK YOUR MESSAGES!!! Weather Cancelations Are Common - I Make Every Attempt To Let Clients Sleep In If The Weather's Not Going Our Way..
Be a half hour early! We always leave early!
..except when someone shows up right on time.
Clients arriving late will see the west end of an east bound boat. With a limited number of reserved spots, I do not refund because you over-slept or had a flat.. If I cancel for weather, refunds/reschedules are standard. 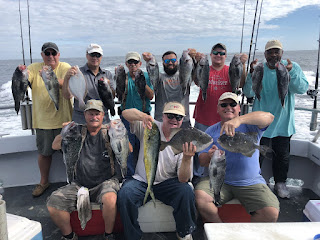 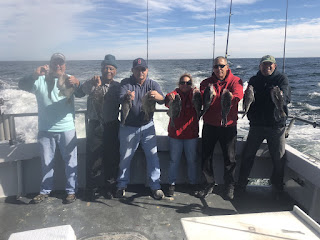 Greetings All,
Sea bass continue to please. Not "all limits, all the time" except on longer trips where I'm still batting 100, but most everyone gets into double digits and usually some folks limit-out on regular trips too.
It's been kind.
Although a light rail, had a bunch of regulars aboard for Monday, 10/8's regular trip. Sea bass had been hitting jigs every trip for weeks so I rigged enough 5 & 6 ounce spoons for all to enjoy my favorite style of cbassing..
Yeah No.
Would not TOUCH a jig. And when they did, they somehow evaded the hook.
Thankfully bait was working just fine.
On my 10 hour trip the next day, same result ..until they turned on. One fellow was trying every trick in the book and had not a single keeper cbass. Another angler, fishing forward of the trick-shot artist, was using our regular boat rig and boat bait and was nearly limited out when
..sea bass started to chew. Catching doubles on a two-hook 7 ounce jig, the keeperless angler was soon bagged out. So was everyone else including my crew & I who'd hardly fished at all...
Sometimes we have to grind it out.
Sometimes anglers have to switch to what's working too!
Have also had two anglers limit on flounder just recently. Targeting fluke will seriously cut into your sea bass catch, and may not be worthwhile at all. But if you want to try it...

Have not been selling-out my 20 person longer trips, but the higher fare still allows me to go anywhere I want. So far that's been a good thing.
Weather can be challenging this time of year. Not heavy weather like the astounding destruction from recent hurricanes; just regular fall wind patterns making days unfishable has been a pain. Though we had a long stretch of pretty days early in October, that hasn't been the case of late. In fall sometimes a wind can start slow, then become higher than forecasted and we'll get a butt-kicking offshore - especially with NW winds.
It was on days like that, after a good thrashing, my old friend Jack Kaeufer would pull up behind the boat with a fresh cup of coffee & tell a tale or two from his fishing in the 1950s/60s..
Jack's passed now. A man formative in my younger days, I am fortunate to have had his guidance.
Am fortunate too that I am in position to cause anglers far into the future to ponder why so many gave so generously that we might build a long-lasting artificial reef in his honor. You might never fish it from my rail, but, believe this, Jack's Reef will be another of our best artificial reef sites. Sue Foster's Reef, Jimmy Jackson's Reef, Doug Ake's Reef; these and many others will be spawning grounds & fishing spots long after any reader of today is gone.
It's a project worth doing..
(Have a seriously sweet Benelli O/U the Reef Foundation is raffling off. This $3,000.00 12 ga over/under would be tops in my collection, but I can't play! Tix are one for $10, three for $20, and ten for $50 - Drawing is Sunday after Thanksgiving! Email mhawkins@morningstarfishing.com & I'll send you some tix..)

While we have raffles & dinners; charts & t-shirts for sponsors - all trying to raise money for reef building, our federal marine fisheries restoration efforts -- NOAA/NMFS, Councils & Commissions -- agencies have their efforts aimed squarely at catch restriction.
Hardbottom habitat wholly unstudied in our marine region, yet studied to the nearest square meter in our estuaries; the feds think if they can, at long last, "control overfishing" that regulated species will rebound to target levels.
You've surely seen video of Mexico Beach, Florida, after Micheal came ashore? Sadly, a before & after of that town makes a suitable comparison to our natural reef hardbottoms as the various industrial stern-towed fishing gears became more numerous post WWII.. With surplus diesel engines cheap, fish numerous, and lots of men needing work - Mid & North Atlantic commercial fishing wharfs bustled with commerce.
In fact, there were more sea bass caught and sold by the pound, most by trawl, from 1950 to 1961 than in all the years since - combined. They did that w/o Loran C or GPS - Just fishing with a compass, RPM gauge & watch..
I've seen some amazing abundances of sea bass, especially in the early 2000s soon after regulation began. Yet nothing in my time is more than a shadow of historical abundance.
I've heard from skippers up and down the coast over the years. Loss of hardbottom habitat isn't unique to our marine area - and certainly not the sole province of oyster reef loss in our estuaries.
The "Bass Grounds," for instance, lie 7.5 to 9 miles east of OC Inlet. There was a time when bass pot flags covered the area, and when recreational fishers fished sea bass there from late May/early June until sea trout showed just off the coast in mid/late August. This was drift fishing. Rarely did those anglers fish from anchor.
In the mid-1960s surf clam boats began working that bottom. By the late 1970s, the natural reef was gone.
There remain a few very small patches of sea whip growing on cobble rock--literally a few square yards where once there were square miles, and a slowly increasing artificial reef footprint.
The point I am forever trying to get management to grasp is that No Amount Of Catch Restriction Can Recreate Populations Of Fish From Habitat That's Gone Missing.
You'd as soon find squirrels in a 1,000 acre wheat field.
Here, and likely in many other places, the bottoms those hard and soft corals grew on was not truly rock, but a soft sandstone/hard peat sort of bottom. In pieces I've had divers bring up one could easily break the 'rock' and grind it into sandy mud by hand.
To regrow many lost bottoms, and especially the Bass Grounds, will require we add substrate - like boulder.
Working on that.. Get the substrate down, fish and corals will take care of the rest. It really is that simple. Roll rocks off a barge - grow reef.
Meanwhile, below is an example of what NOAA uses to inform the management community of our 'catch' so they can better regulate in the future.
You'll see where MD Shore anglers landed more pounds of sea bass in one year than all MD Party/Charter over 3 years.
I've been complaining about catch estimates since 1998.. They've changed this & that, but the results have grown much worse, especially under the Marine Recreational Information Program (MRIP)..
NOAA insists everything averages out. That a spike in the data here and there is A-OK. I have no idea how..
Our recreational catch data needs a major overhaul.
MRIP ain't it.
With management absolutely blind to real catch, habitat hasn't a prayer. They'll never be able to give habitat a numerical contribution value so long as catches can pole-vault about without raising an eyebrow.
So far we have one angler who claims to have caught a keeper sea bass from shore in MD.
That's a far cry from 178,000 pounds...
Regards,
Monty
Capt. Monty Hawkins
Partyboat Morning Star
Ocean City, MD
mhawkins@morningstarfishing.com

MD All Party/Charter
MD Shore-Caught Only
Posted by M at Thursday, October 18, 2018