These longer trips just allow me to get places I wouldn't normally go. Not always, but usually rewarding..

Reservations Required at 410 520 2076 - LEAVE YOUR BEST POSSIBLE CONTACT NUMBER - AND CHECK YOUR MESSAGES!!! Weather Cancelations Are Common - I Make Every Attempt To Let Clients Sleep In If The Weather's Not Going Our Way..
Be a half hour early! We always leave early!
..except when someone shows up right on time.
Clients arriving late will see the west end of an east bound boat. With a limited number of reserved spots, I do not refund because you over-slept or had a flat.. 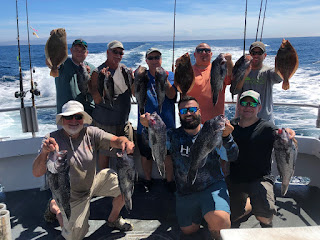 Greetings All,
Started to send a report on September 1st saying, "Flounder have pushed sea bass to the side of late--have been the star of the show. Still seeing some cbass, even impressive ones, but the fishing is about fluke/flounder for now."
It went on: "That'll likely change when we get a deep-bodied swell or heavy weather event.."

Hmmm.. Seen any heavy weather?
Sakes. How about most of September!
..and those poor Carolinians with Hurricanne Florence.
Our conditions have settled lately - no more monster swells. Some beautiful weather even.

Though still seeing a few everyday, that flounder bite really is history. Even had a boat limit of flounder in early September. The very next day, with clients knowing "The Bite Is On!" ..the bite was off. Current was all but dead. Can't fix current.
Now sea bass are chewing - really chewing. Had an easy boat limit on today's 12 hour trip (29th). Have had other clients limit on cbass of late.
Many times in August early/Sept I'd tell clients about all the sea bass I was seeing on my sounders, big schools -- yet they'd get no bites save flounder.
Sea bass often feed on plankton well up in the water column. I've caught 'em on small jigs just 30 feet down but in 90 feet of water. Caught 'em on a fly barely underwater in 55 feet of water.
Whereas tautog feed exclusively on a reef's biological production--crabs & mussels growing there; in summer, sea bass are more often interested in a reef as a getaway - a place to hide if predators arrive.
Starting to act like an autumn bite - sea bass are no longer turning their noses up at our baits - for now!

What's a Fish Report without a good recreational catch data rant? MRIP published their May/June black sea bass catch estimates a few weeks back. For Maryland MRIP (Marine Recreational Information Program) paints a picture where almost no one went sea bass fishing. Charter & Private Boats pulled a goose egg. Both had an average number of trips, I think, but MRIP shows zero. Season was open. We're allowed 15 per-person. The weather wasn't Always bad ..yet MRIP informs NOAA & the management community that MD Party Boats killed 1,800 sea bass in May & June, and no one else took any.
Hundreds of times my clients have taken that many in a day -even 3X that many- but no more, not since bag limits..
If I had been the only party boat going this spring (hardly the case) my clients would have had to average 2.7 keepers per-person for that to be a true(ish) number.
Ah, no. We had a great spring. I anticipate other boats caught as well. The number of sea bass caught in MD is provably higher.

Why is this so hard? Why can't MRIP get Party/Charter catch right? We tell NOAA what we caught - every day. Electronically now. We'll get in deep doo-doo if we don't. Yet MRIP still can't come within a country mile of factual party/charter catch. WE TELL THEM WHAT WE CAUGHT!!

Unfortunately, our sea bass weren't what MRIP's official guess claims they weighed either. No, NOAA, our "average sea bass" were not 1.4 pounds this past May/June. Our size limit is 12.5 inches.. Takes a couple to make 1.4 pounds, I'd think.
As has often been the case since 2009, Massachusetts "Private Boat" anglers had, by the end of June, already taken a huge chunk of the Maine to North Carolina recreational quota -- 1,468,000 lbs of our 3.33M lb "Recreational Harvest Limit" - almost half. (Massachusetts = MA)
They probably didn't. Fishing 42 possible days, with a 15 inch size limit at 5 fish per-person, it's hard to imagine actual damage to our coastwide sea bass population.

Where in MD Party Boats were to only ones to land sea bass; MRIP asserts Massachusetts (MA) Private Boat caught 13.6 pounds of sea bass to every one pound by MA Party/Charter. (1.5M vs 108K  ... In fact, MA Private Boat "caught" more sea bass than all Party/Charter from Hatteras north; 1.5M vs 263K - That's a LOT MORE!
MRIP asserts there were 2,496 limits caught DAILY by Private Boats in Massachusetts. Most of those limits would have been caught in Buzzards Bay. By averaging 3 anglers per boat and having everyone catch a limit, that makes 832 boats per day on the sea bass grounds.. (If everyone didn't catch a limit, there'd have been a lot more boats..)
Watched seven YouTube videos shot this spring about sea bassing in Buzzard's Bay. In one video I could see 4, maybe 5, other boats. In two other videos I could see 1 other boat. The rest offered no other boats whenever the camera panned the horizon.
Most boat owners are NOT wealthy retirees. They have to work too. Because far-fewer Private Boats are factually out weekdays - this "832 Boats Per Day" number would have to decline weekdays and skyrocket on Saturdays.
I'd think Saturday fleets of boats numbering in the many 1,000s, all limiting out on 15+ inch sea bass, worthy of video all its own. Hasn't turned up in my searches yet..
Yuuuppp... According to MRIP, Party/Charter guys only caught 2.1 pound average sea bass while Private Boats caught 2.8 pounders.. Having only landed 6.8% of Massachusetts' spring run sea bass, I'd have hoped the pros could at least catch on par..
This is a goofed up way to manage fish. These statisticians think they have something. They got nothing. Estimates that do come close are by luck. The norm is far too high and far too low. Guarantee the next set of MRIP data, July/Aug, will blow through the sea bass Recreational Harvest Limit. NOAA will again force managers to use catch data (that's laughably false) to choke the sea bass season further still. MRIP not only crushes many fisheries' economic potential, but blinds ecology & biology from management's sight....
Washington DC's a busy place. We're all busy. Just got done a major overhaul of my port engine myself--and, boy did she need it!
Now I need to see if the Senate version of "The Modern Fish Act" addresses NOAA's use of bad recreational catch data.
Somehow, I doubt it...
Regards,
Monty