Fish Report 1/25/18
Caught - Slower & Slower
Reason? Colder & Colder!
Release Mortality = No Science
Folks - This is WINTER tog fishing. A trip can go south fast. Tog DO NOT always bite! (especially when the water gets too cold!)
(If they did always bite they'd more closely resemble the distinguished portly rotundity of a partyboat skipper..) Yes, my clients have caught 7 tog over 20 pounds   ..but there were many other days when we paid dearly.
Mate Danny might have white crabs. (He's fishing as I write.) Usually Does -- Bad Winter. The boat provides green crabs. Reservation staff hardly know what species we're after, let alone whether there will be a certain kind of bait. Reservation Staff, however, are the only way to secure a spot. I may not check email all day - they're manning phones 24/7..
Sea Bass Are Closed. I sincerely hope this will be the last year of that nonsense. (have hoped just that some many years now, however..)
All Winter Trips Posted Via Email & FB. There's just no use trying to go everyday in winter.. (ESPECIALLY THIS WINTER!)
Danny Might Have White Crabs -- Boat Provides Greens Only.
Tog Fishing Friday, 1/26/18 - Long Tog - 6:30AM to 4PM- $125.00 - 16 Sells Out.
Tog Fishing Saturday, 1/27/18 - 6:30 to 3:30 - $125.00 - 14 Sells Out.
Reservations Required at 410 520 2076 Open 24/7 - On My Rig You Can Reserve What Spot You're In. Please See http://morningstarfishing.com For How The Rail's Laid Out..
LEAVE YOUR BEST POSSIBLE CONTACT NUMBER - Weather Cancelations Happen - I Make Every Attempt To Let Clients Sleep In If The Weather's Not Going Our Way..
Be a half hour early! We always leave early!
..except when someone shows up right on time.
Clients arriving late will see the west end of an east bound boat. With a limited number of reserved spots, I do not refund because you over-slept or had a flat..
Green Crabs (not Whites!) Provided As Boat Bait And Are Included In All Fares.
Skunks are always possible while tog fishing.
Really. It's a frequent occurrence. Sometimes even the very best toggers get their head handed to them despite folks all around having done well.
Then too, sometimes the whole boat can do very poorly.
If you can't take the heat, and there ain't much of that either, stay out of the kitchen.
Going Toggin Anyway! Tog Only, Sea Bass Are Closed Because NOAA Has Absolutely No Real Idea How Best To Manage The Fishery.
No Live Tog Leave The Boat - Dead & Bled - Period. (I Believe The Live Tog Black Market Has Hurt This Fishery ..But Nowhere Near As Much As Bad Sea Bass Regulations)
Agreed With Or Not, All Regulations Observed – Maryland: 4 Tog @ 16 Inches
If You Won't Measure & Count Your Fish, The State Will Provide A Man With A Gun To Do It For You. We Measure & Count — ALWAYS — No Exceptions!
It's Simple To Prevent Motion Sickness, Difficult To Cure. Bonine seems best because it's non-drowsy. Truly cheap & effective insurance.
Honestly - If you get to go on the ocean once month, once a year, or even less; why risk chumming all day? Similarly, if you howl at the moon all night, chances are good you'll howl into a bucket all day.
Bring A Cooler With Ice For Your Fish – A 48 Quart Cooler Is Fine For A Few People. Do Not Bring A Very Large Cooler. We DO have a few loaners - you'll still need ice.
No Galley! Bring Food & Beverages To Suit. A few beers in cans is fine for the ride home.
In winter waterproof boots are almost a necessity. (and great socks! like over the calf smart wool .) While some rarely, or never, wear gloves for fishing, you'd not likely see me fishing this time of year w/o at least the half-finger wool gloves.
Layers are best because, believe it or not, sometimes it can be very pleasant offshore--especially when the wind lays down. In winter it's warmer offshore owing to warmer waters. In summer it's cooler..
19,551 Reef Blocks deployed at numerous sites as of 11/12/17: TNC's Restoration Reef 278 - Doug Ake's Reef 3,343 - St. Ann's 1,952 - Al Giles/OC RUST Reef 1,505 - Eagle Scout Reef 970 - Sue's Block Drop 569 - Nichols' Concrete 1134 - Capt. Bob's Inshore Block Drop 705 - Benelli Reef 418 - Capt. Bob's BG Reef 784 - Wolf & Daughters Reef 220
Recent Blocks Provided By Potomac Valley Brick - Thank You!
Support the Ocean City Reef Foundation! http://www.ocreefs.org (lots of reef pics here..) The OC Reef Foundation is a 501c3 non-profit with no payroll & no rented office space -- We Build Reef. Also registered w/Amazon Smile. We're Nowhere Near Reef Building's True Potential. Thank You! 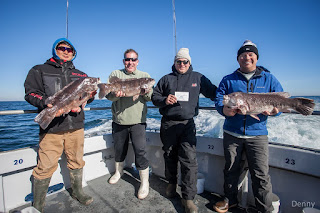 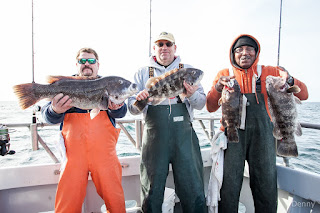 Dean, Arrie and Mike showed 'em how...
Greetings All,
Had four trips in a row - watched the bite taper as south-bound currents carried colder & colder water from the north across across our reefs.
Wasn't fishing without reward. Had at least a few decent fish every day. Also had some of the best tog anglers you'd care to meet scrubbing the skunk off...

Whales .. Seeing whales in, for us, large number. That means sometimes zero/sometimes 6 a day.. Cold pushing them south. Maybe cod too soon?
​
Have begun reef efforts. Side-scanning, chart corrections; our bargeloads of concrete & 'boatload of reef blocks' trips will begin soon, & hopefully, that huge project with boulder too. Those signed up for the Ocean City Reef Foundation's email can expect news in coming weeks. http://www.ocreefs.org
Was at a recent sea bass meeting when the presenter told how important calculating "recreational release mortality" was in determining allowable recreational catch. Pretty good crowd, I told everyone how I'd studied release mortality since before regulation began; how in later years (right after the 2009 'emergency' sea bass closure) we'd taken trips with MAFMC & MD DNR Fisheries aboard to study recreational release mortality.
The concern is 'barotrauma' - when you see the stomach bulged out & eyes a bit too.
Ain't much use throwing fish back if they die. We were taught -- Everyone was taught -- "They All Die" in the 1970s & 80s. As a young deckhand I was told there was absolutely no use in throwing any fish back.
Yet in the first year of sea bass size limit self-regulation (5 yrs before fed/state regs began) we were seeing hook wounds, sometimes multiple hook wounds, in sea bass at heavily fished reefs. These fish must have been caught, released, and caught again -- even 5 times!
Even though they obviously reacclimate gas pressure; still, "They All Die" persisted.
So my crew & I began tagging. That's when we learned about habitat fidelity..
(Conclusion on habitat after many years of thought: If regulation were perfected to maximize production/extraction from available habitat -that a perfect balance were achieved - if a population of sea bass were taken as high as possible - then the only way to increase that region's population would be to increase available reef-like habitat so that entirely new spawning populations were created upon entirely new reefs..)
..tagging showed us sea bass do just fine with release; that those hook wounds we'd observed had told the truth of mortality -- very low.
At about that same time (1996-ish) some scientists on the monitoring committee took their minds off scallops & fluke--or some other 'important' species--and drew 25% from thin air as the "Recreational Discard Mortality" for sea bass.
And, with 25% as our dead-discard rate -- in 6 years (by 2003) sea bass were at their highest population ever off DelMarVa.
It didn't matter how wrong their assumptions were so long as MRIP's dead statistical cousin, MuRFSS, didn't have us over our recreational quota...
Would that fisheries were in a better place with knowledge today.
We are not.
When NOAA's 2009 'emergency' sea bass closure occurred I was fighting obviously bad estimates hard, &, as an aside, the 25% mortality assignation..
That's when I took fisheries staff - for free mostly - out fishing in 125 feet of water to study release mortality. We'd reel a fish up, and as soon as it broke the surface start a stopwatch. (I'd already been doing this for years.) When the the fish swam down out of sight, the watch was stopped.
In 3 days of good sea bass fishing in warm summer water, we could not obviously kill a sea bass from barotrauma.
There were NO floaters.
Most sea bass fishing along the coast -- and ESPECIALLY where far higher numbers of discards occur -- is inside 90 feet of water, even much less.
In fact, where MRIP shows UNBELIEVABLE CATCHES DESPITE INCREDIBLY STRICT REGULATION, the water is much shallower.

After those trips with staff aboard the release mortality assigned to rec fishers mysteriously dropped to 15%..
I promise THAT number is also too high.

So, during the recent meeting I was told how my observations differ from the "science." That the 15% was a good number, if you will, and that my observations were unique..
What the presenter did not realize was, whether from early in management or much more recently -- when science is absent, they just wing it.
Release mortality -- Spawning Biology's Role In Production -- Habitat/Ecology's Role In Populations; or, more accurately perhaps, habitat ABSENCE's role in reduced populations, & warming's role in NEW populations: aside the assertions of long-time fishers, here our true scientific understanding of sea bass is quite near zero.
Add to that MRIP's Recreational Catch Estimates with proportions of catch that could not possibly be true - could in no possible way be vaguely accurate - and you begin to understand how a population of fish supposedly managed with 'economic yield' very much in mind can climb to a population far-far-far higher than any had dreamed  ..and still "Scientifically Require" quota cuts.