Fish Report 1/17/18
Went & Tog Bit
Going & Don't Know If Tog Will Bite Again!
BSB Comment
Folks - This is WINTER tog fishing. A trip can go south fast. Tog DO NOT always bite! (especially when the water gets too cold!)
(If they did always bite they'd more closely resemble the distinguished portly rotundity of a partyboat skipper..) Yes, my clients have caught 7 tog over 20 pounds   ..but there were many other days when we paid dearly.
Mate Danny DOES NOT have white crabs. Usually Does -- Bad Winter. The boat provides green crabs. Reservation staff hardly know what species we're after, let alone whether there will be a certain kind of bait.
Sea Bass Are Closed. I sincerely hope this will be the last year of that nonsense. (have hoped just that some many years now, however..)
All Winter Trips Posted Via Email. There's just no use trying to go everyday in winter.. (ESPECIALLY THIS WINTER!)
We Have No White Crabs -- None. Greens Only.
Opening Tog Trips:
Friday, January 19th - 7AM to 3PM - $110.00 -- 12 Sells Out
Saturday & Sunday, January 20th & 21st - 7AM to 3PM - 16 Sells Out - $110.00
Monday, January 22nd - 7 to 3 - $110.00 - 12 Sells Out..
We Have No White Crabs -- None. Greens Only.
Reservations Required at 410 520 2076 - On My Rig You Can Reserve What Spot You're In. Please See http://morningstarfishing.com For How The Rail's Laid Out..
LEAVE YOUR BEST POSSIBLE CONTACT NUMBER - Weather Cancelations Happen - I Make Every Attempt To Let Clients Sleep In If The Weather's Not Going Our Way..
Be a half hour early! We always leave early!
..except when someone shows up right on time.
Clients arriving late will see the west end of an east bound boat. With a limited number of reserved spots, I do not refund because you over-slept or had a flat..
Green Crabs (not Whites!) Provided As Boat Bait And Are Included In All Fares.
Skunks are always possible while tog fishing.
Really. It's a frequent occurrence. Sometimes even the very best toggers get their head handed to them despite folks all around having done well.
Then too, sometimes the whole boat can do very poorly.
If you can't take the heat, and there ain't much of that either, stay out of the kitchen.
Going Toggin Anyway! Tog Only, Sea Bass Are Closed Because NOAA Has Absolutely No Real Idea How Best To Manage The Fishery.
No Live Tog Leave The Boat - Dead & Bled - Period. (I Believe The Live Tog Black Market Has Hurt This Fishery ..But Nowhere Near As Much As Bad Sea Bass Regulations)
Agreed With Or Not, All Regulations Observed – Maryland: 4 Tog @ 16 Inches
If You Won't Measure & Count Your Fish, The State Will Provide A Man With A Gun To Do It For You. We Measure & Count — ALWAYS — No Exceptions!
It's Simple To Prevent Motion Sickness, Difficult To Cure. Bonine seems best because it's non-drowsy. Truly cheap & effective insurance.
Honestly - If you get to go on the ocean once month, once a year, or even less; why risk chumming all day? Similarly, if you howl at the moon all night, chances are good you'll howl into a bucket all day.
Bring A Cooler With Ice For Your Fish – A 48 Quart Cooler Is Fine For A Few People. Do Not Bring A Very Large Cooler. We DO have a few loaners - you'll still need ice.
No Galley! Bring Food & Beverages To Suit. A few beers in cans is fine for the ride home.
In winter waterproof boots are almost a necessity. (and great socks! like over the calf smart wool .) While some rarely, or never, wear gloves for fishing, you'd not likely see me fishing this time of year w/o at least the half-finger wool gloves.
Layers are best because, believe it or not, sometimes it can be very pleasant offshore--especially when the wind lays down. In winter it's warmer offshore owing to warmer waters. In summer it's cooler..
19,503 Reef Blocks deployed at numerous sites as of 11/12/17: TNC's Restoration Reef 278 - Doug Ake's Reef 3,343 - St. Ann's 1,928 - Al Giles/OC RUST Reef 1,505 - Eagle Scout Reef 970 - Sue's Block Drop 569 - Nichols' Concrete 1134 - Capt. Bob's Inshore Block Drop 705 - Benelli Reef 418 - Capt. Bob's BG Reef 784 - Wolf & Daughters Reef 220
Recent Blocks Provided By Potomac Valley Brick - Thank You!
Support the Ocean City Reef Foundation! http://www.ocreefs.org (lots of reef pics here..) The OC Reef Foundation is a 501c3 non-profit with no payroll & no rented office space -- We Build Reef. Also registered w/Amazon Smile. We're Nowhere Near Reef Building's True Potential. Thank You! 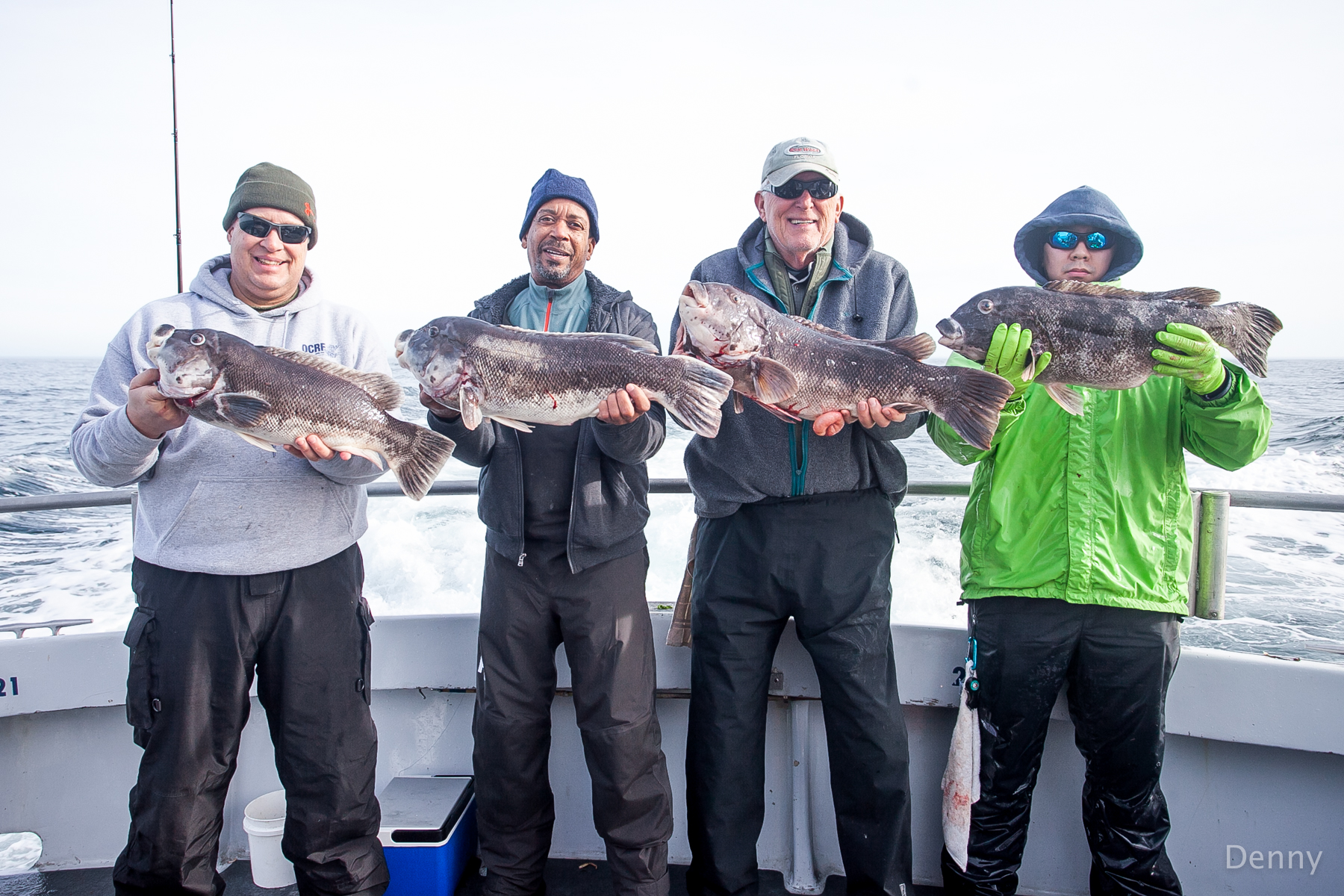 George, Mike, John, & Chol show off some dandies from our last tog trip January 11th..
Greetings All,
Had a fine tog trip the 11th. Two fellows limited out. Most everyone had dinner+..
Ocean's getting mighty cold, mighty fast. Temps we might normally see in late Feb/early March are happening now.
Tog have a threshold: we'll get to build a lot of reef if it gets too cold.
Have 4 trips scheduled. Haven't had but 2 all of January so far. This is a brutal fishery ..in a brutal winter.
For some, that makes it even more fun.

ASMFC & MAFMC have sea bass going on. When my crew & I began tagging sea bass back in 1994, one of the first things we learned besides: "Yes, Sea Bass Survive Release," was sea bass also have extreme habitat fidelity. (Management STILL has no real idea release mortality rates -- as in all things, we pay dearly for their ignorance..)
Very early on, before regulation even, I began to urge managers to regulate black sea bass (BSB) regionally - to have distinct regional quotas. In fact, I foresaw commercial 'pulses' if we did not--that a region's population would swell and get harvested as multi-state winter trawl effort congregated near the canyons; that every year a different region's population would get whacked..
As with everything I've suggested, there was nothing but a whole lot of "Can't."
"We Can't Sub-Divide The Hatteras To Cape Cod Region Into Smaller Spawning Regions."
I mean really, why would temperate coral habitat matter to temperate reef fish; nor the fact that they winter far offshore yet rush inshore come spring to lay claim to the exact piece of reef spawning habitat they had the spring/summer before. Why on EARTH would habitat & how it's used matter to fishery management plans?
Now, however, after squandering millions & millions & millions of dollars in unrealized BSB catch - both recreational & commercial - today's managers clearly see need of regionalization.

Must be a PHENOMENAL amount of sea bass in that small slice of rocky bottom between Block Island & Cape Cod. I mean truly astounding.
Today's SSB (SSB = Spawning Stock Biomass or simply Spawning Population) ..today's graph shows a population far greater than the highest population in my experience in the early 2000s.
When we first had the 25 fish creel limit in 2002 - it was attainable. We often had clients catch 25 keeper sea bass.
In 2003 my clients limited out more often than not. The whole boat would have 25 apiece..
In 2001 we wouldn't have stopped at 25 -- all those years before too. No creel limit - we'd keep catching until the bite stopped or the clock ran out. Thirty, forty, a hundred? No matter -- no regs save a 9, 10, or 11 inch limit (officially beginning in 1997 but we'd started self regulation size limits in 1992..)
So after the bag limit, fishing got a lot better, right?
Ah, no.
It did not.
At all.
And, boy, is the reason complex.
Far simpler than my 'age at maturity*' thesis, scientists are too glad to point to climate change as the culprit. A temperate reef fish that's doing just dandy in Georgia, northern Florida--even in the Gulf coast panhandle of Florida; yet fishery regulators hold black sea bass in the lower Mid-Atlantic have "moved north.."
And, well, they have.
Sort of.
In the last 15 years they've begun spawning in the Elizabethan Islands below Cape Cod - Martha's Vineyard & such. They're being caught from kayaks in Buzzards Bay (south of Cape Cod between the Vineyard & mainland) where, having tried to eradicate scup from those waters in my youth using clam, I'm certain I'd have seen sea bass in the early/mid 1970s had they been there.
(*A piece here on age at maturity shift in sea bass owing size limit regulation (and more!) this is why I think sea bass, while holding their own, are not as numerous as in the early 2000s --http://blog.morningstarfishing.com/2011/12/fish-report-121111.html )
Lots & LOTS of rock up there. Granite.
Buzzards Bay has warmed over 10 degrees in the last few decades--more like 12. This shallow bay catches southerly summer winds perfectly to warm. Sea bass are now using it for spawning habitat.
BUT -- sea bass are available still in Georgia & Florida..
This is really important: where there has been habitat EXPANSION into the Cape Cod region -- there should NOT have been a habitat contraction in the lower Mid-Atlantic.
If there is a contraction of sea bass habitat owing to warming, it is in lower/central Florida somewhere.

What a terrible place to call "science." By law we have to regulate using "the best available scientific information."
So far as management's concerned:
Sea bass (as partly proven by MRIP recreational catch estimates) have shifted north and left the southern end of the management unit.
Sea bass habitat is of no consequence because the population shifts up and down anyway.
If there were impacts to this supposed 'reef habitat' it would grow back in less than a year. (They know because that's how long it takes to get growth on sea bass/lobster traps. (I swear!))
There's probably a genetic difference sea bass above & below Hatteras. Ours like colder water and have fled north. (so help me -- that's science)
Not if, but when MRIP shows one state's private boats catching as many fish in a few weeks as all Party/Charter across the 9 state management unit, that's science and don't you dare argue what are obviously lovely statistics. It MUST BE TRUE because it's on a computer screen.

All real examples; and from this hopeless place of ill-considered rubbish being treated as sound, policy-forming, information -- today we finally have "regional" sea bass quotas being devised.
It's still a horrid place where MRIP catch estimates could instantly stop the sea bass fishery dead in its tracks. And it's NOT going to be a fair division of quota - can't be because it's partly based on MRIP catch estimates, & over a fishery that's long had huge biological influences stemming directly from recreational regulation - but at least management is headed toward quota that uses habitat spawning site fidelity as a guide for extraction
.. exactly what was so blatant from those early ALS tag returns.
If you'd like to make comment on these deliberations, here's the link.
The Draft Addendum is available at
http://www.asmfc.org/files/PublicInput/BSBDraftAddendumXXX_PublicComment.pdf
Just now there's an article from the Island Free Press showing sea bass will open in February.. Well, that's interesting. Let's see if it's true.

It remains true that during those few years when we were limiting-out with 25 sea bass limits -- all of those legal fish 12 inch back then had been spawned when there was no bag limit & an 11 inch or less size limit.
2003 was the greatest population of sea bass I have ever witnessed.
Now NOAA says there are several times that many today.

Well, maybe, but not in this region.
But by regionalizing we can begin to unravel habitat fidelity's crucial role in increasing populations.

Sea bass are the easiest fish to restore. Roll rocks off a barge, force them to spawn young -- everyone will eat sea bass, including sharks & bluefish.
Unfortunately, right now computers & MRIP catch estimates 'eat' more, by far, than the recreational fishery..