Reservations Required at 410 520 2076 - Staffed 24/7 (Asking me for a reservation via FB or Email is a guaranteed way to wrench up the business! Use the reservation line!)  On My Rig You Can Reserve What Spot You're In. Please See http://morningstarfishing.com For How The Rail's Laid Out..
LEAVE YOUR BEST POSSIBLE CONTACT NUMBER & LISTEN TO YOUR MESSAGES - Weather Cancelations Happen - I Make Every Attempt To Let Clients Sleep In If The Weather's Not Going Our Way.. 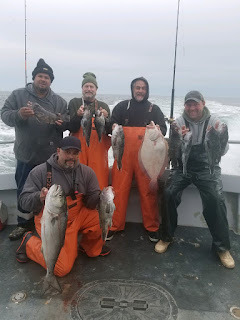 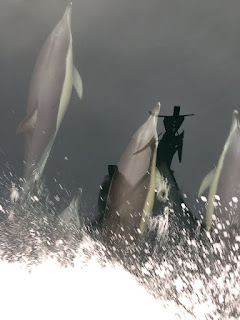 Greetings All,
Had a scientific research tog trip last week. Clients didn't know it while booking, but they were allowed to take every tog - no throwbacks. And good thing too -- we sure didn't have many +16 inch keepers! A team of MD DNR biologists were dissecting all their fish for aging analysis the Atlantic States Marine Fisheries Commission (ASMFC) does on an annual basis.
As every state is required to do 200 tog, I think it quite wasteful. But because one year all 200 tog came off just one artificial reef, I'm glad to help diffuse the take - spread the effort to more numerous sites. That reef was dead for a couple years..
There is talk of combining MD/DE/VA's samples into one region.. The data set is awesome & really doesn't need 200 from everywhere anymore (& never did!)
Because MRIP tells our biologists MD Private Boats caught 114,281 Tautog in March/April of 2010 - why would they worry over removal of 200?
Well, from 1988 to 2018 MD's Party Charter Boats are thought to have taken just 23,500.. Not even 25% of MD Private Boat's catch during one year -vs- landings across 30 years of professional March/April effort.
MRIP Stinks. Lots & Lots Of Laughable Catch Data - would be laughable except it so messes up regulation and clouds our best paths forward to making our oceans & bays as productive as possible..
I rarely see a private boat in April. Tempted to say Never in March. I do see a few other For-Hire skippers.. It's just another perfect illustration of how truly dumb MRIP assertions of recreational catch are. Managers' adherence to "Treat MRIP as Fact" is driving restoration efforts hard astern by blowing a smokescreen of bad data across computers everywhere.
How In Billy Blue Blazes could biologists EVER get a handle on their true tasks when forced to feed fully impossible data into their models...
Also had a much more successful sea bass trip than my previous one. Had to burn a jag of fuel to do it; had some limits & really nice cbass aboard.
Caught a 27 inch fluke too. When several of us tried to replicate the feat, we only caught green-eyed spiny dogfish devils.
Still seeing saddleback dolphin on long trips. Have posted video on FB.
We try sea bass & tog again. Trips Above. . .

Nothing messes up tog fishing like "black water." This is when detritus such as dead algae that has settled through the water column to bottom are wildly stirred up - mixed completely back into the water column.
For some animals this "marine snow" is food. They must be thriving?
Algae, you see, is getting worse in the lower & central Mid-Atlantic. Although truly a key component of marine ecosystems, too much is too much. Because we add marine nutrients in vast quantity from DE & Chesapeake Bay outflows, algae in this marine region flourish. It's turned our part of the ocean green.
Old timers 3 & 4 generations back once caught white marlin as close as 3 miles offshore in blue water; 2 generations ago billfishers knew "The White Marlin Capitol of the World" and only fished 8 to 30 miles offshore in blue water (with the predominate effort at Jackspot Shoal some 21 miles SE OC MD) and today, owing only the greening of our Mid-Atlantic waters, billfishers must travel at least 50 miles - with 80 & 100 mile runs not uncommon..

Overnutrified waters.. This is THE battle in Chesapeake Bay. There's a lot to it.. I believe recent successes in oyster reef restoration show it's only a matter of money & construction now. We know how to restore oyster populations in grand scale - have done it several places. Lenny Rudow of Fish Talk magazine told me he'd been sightcasting stripers as if bonefish on a Caribbean flat(!) atop the Harris Creek oyster restoration site last summer.
Water quality restoration is doable!

But so far as recognizing the OCEAN is being affected by declining water quality? Hasn't made the work list yet. In fact, I'd argue marine water quality is fully unrecognized as anything in need of repair/restoration..
So algae die and slowly settle to the bottom. This can take weeks in the deep, is obviously faster the shallower you go. However, what we're starting to experience more & more of is resuspension of this detritus.
When an east wind of 45 knots or better builds a deep bodied swell, that wave energy travels all the way to the bottom. Sand gets moved around, even wrecks & artificial reefs can get moved.
Florida had a huge ship (sunk as artificial reef) move a quarter mile a few years back. All that super-lightweight dead algae? It's like a dry snow - but made of helium - it floats in the water only settling slowly.

When black water occurs (every bit of detritus resuspended) we find the flounder bite is done - kaput. Tautog too. Sometimes even sea bass can be affected. So much fluff from the bottom is stirred up that visibility becomes zero. Typically an underwater camera sees better than the human eye. After a hearty blow visibility can be completely lost just 20 feet down.
It HAS to be affecting desirable reef growth too. Some algae is good. It's food. As in our estuaries where submerged aquatic vegetation must have light, blocking sunlight is no good at sea either.
But that's only if you believe, as I do, that sea whip - a principal habitat maker, a soft coral, is sunlight dependent. We're even ignorant of that..
Zooanthellae are studied everywhere known to have important coral habitat.
Not here. Not yet. We don't have coral habitat above Cape Hatteras.
I feel quite certain this 'black water' is becoming more of an issue off the coast here. It's getting worse.
Demersal fish feeding all but halts.
Worst I ever saw was after Hurricane Sandy..
But we had a good bit of it a few weeks back in just 45 knots of ENE wind. Killed the inshore tog bite for a week or so.

Oyster reefs in DE & Ches Bays are the biggest part of it. Oysters clean water incredibly well. https://www.youtube.com/watch?v=saAy7GfLq4w
Of numerous groups working on oyster restoration - The Nature Conservancy, CCA MD, & Chesapeake Bay Foundation seem to be swinging hardest.
I believe restoring white marlin to the Jackspot is 100% doable. Whole lot of other fisheries will be along for that ride.