Fish Report 7/2/18
Summer Sea Bassin
A Few Inshore Mahi
Accelerated Reproduction
Had a charter cancel for the 5th of July!! Day's wide open for reservations!
Sailing Daily For Sea Bass - Weather Permitting - Saturday's 6:30 to 3:30 - $125.00 –Otherwise 7 to 3 at $110.00..
Fishing's been kind. Nice sea bassing most everyday. Flounder just starting to show up on reefs/wrecks.. So Far We Are NOT Targeting Fluke! (..but seeing some anyway.)
Opening Reservations from mid-July to September 3rd. When you're wondering "how'd those guys book the stern?" - they called early! From now to Labor Day is open..
Reservations Required at 410 520 2076 - LEAVE YOUR BEST POSSIBLE CONTACT NUMBER - Weather Cancelations Are Common - I Make Every Attempt To Let Clients Sleep In If The Weather's Not Going Our Way..
Be a half hour early! We always leave early!
..except when someone shows up right on time.
Clients arriving late will see the west end of an east bound boat. With a limited number of reserved spots, I do not refund because you over-slept or had a flat..
Bonine Is Cheap Insurance! "Natural Dramamine" Does NOT Work!
It's Simple To Prevent Motion Sickness, Difficult To Cure.  If You Suffer Mal-de-Mer In A Car You Should Experiment On Shorter Half-Day Trips First..
Bring A Cooler With Ice For Your Fish – A 48 Quart Is Fine For A Few People.
No Galley! BYO Sandwiches & Soft Drinks. A few beers in cans is fine. (bottles break at bad times)
If You Won't Measure & Count Your Fish The State Will Provide A Man With A Gun To Do It For You. We Measure & Count — ALWAYS — No Exceptions!
http://www.ocreefs.org
We're Nowhere Near Reef Building's True Potential.
If you have a few blocks in the backyard taking up space and just making snake reef, bring em. We'll toss em overboard with the rest.
21,206 Reef Blocks deployed at numerous sites.. TNC's Restoration Reef 278 - Doug Ake's Reef 3,479 - St. Ann's 2,116 - Al Giles/OC RUST Reef 1,623 - Eagle Scout Reef 970 - Sue's Block Drop 593 - Nichols' Concrete 1170 - Capt. Bob's Inshore Block Drop 813 - Benelli Reef 460 - Capt. Bob's Bass Grounds Reef 994 - Wolf & Daughters Reef 470.
Recent Blocks Supplied By Frank Graziano & Jeff Bauer @ Potomac Valley Brick -- Thank You!
Have a line on LOTS of tractor trailer loads of unwanted block. Will see how that goes! 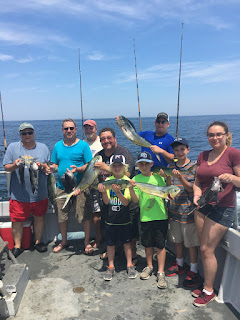 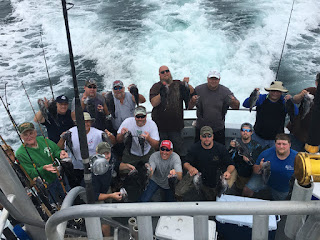 Greetings All,
Although high man is in double digits & sometimes even limited; Although one day we limited-out the entire boat on sea bass in an hour and thirty-five minutes -- it's July now: we're summer sea bass fishing.
Send folks home with a nice fish fry, some a lot better; fishing's not bad at all.
Flounder continue to tease. Haven't been able to make it happen yet. Catch a few some days, but nothing that would cause me to say -- "We're catching flounder."
Have also had a few mahi-mahi about. Talk about a nice surprise on a sea bass trip.. Had a young man (11 years old?) catch a 14 pounder the other day. He tried to give up the rod a few times - we wouldn't let him. Nice pic in Coastal Fisherman I expect..
When he got off the boat I gave him a piece of paper with "Churchill's address to Harrow School" written on it. Told him to YouTube search it.
October 1941.. surely from this period of ten months this is the lesson: never give in, never give in, never, never, never –in nothing, great or small, large or petty — never give in except to convictions of honour and good sense. Never yield to force; never yield to the apparently overwhelming might of the enemy.
https://singjupost.com/winston-churchills-address-to-harrow-school-in-1941-transcript/
I believe the world would be an entirely different place had Churchill not taken his role in history. . . . . .

On the East Coast we have a 10 fish limit on mahi. I'd be thrilled if we caught 10 for the boat while sea bassing..
Used to call them dolphin or dorado, but folks would get all wound up with "dolphin" on a menu. (Oh! We switched to dolphin free tuna and now they want to serve Flipper to us?!) Word usage transition must be very nearly complete if folks such as myself use "mahi" instead of dolphin.
In the Pacific, there are no limits. Even the staunchest conservation groups are A-OK with that because they grow so fast and begin spawning at 3 to 4 months of age.
Oceana is about as protectionist as they come in the marine world; this from Oceana's website: "Though the common dolphinfish is heavily fished by recreational and commercial fishers, its high productivity and young age at maturity have so far protected it from overfishing.  Populations are stable and are able to support the heavy fishing.  Currently, scientists consider the common dolphinfish to be a species of least concern"
This is EXACTLY why I'm trying so hard to get management's attention on black sea bass's varying 'age at maturity.'
In sea bass, 'age at maturity' is malleable. We can change it via size limit regulation as evidenced by the size of blue 'knothead' spawning males -- I witnessed when ALL sea bass in the ocean appeared to be in the spawning class. All scientific works prior to 2000 have sea bass spawning at age zero/age one. (After you correct for mis-aging. It was once thought that a 9 inch sea bass was 3, even 5, years old. We know today that's solidly age one.)
As management began sea bass still spawned in their first months of life or certainly by age one. But after the size limit hit 12 inches that youthful spawning, as evidenced by abundance/absence of less than 9 inch males, was replaced by populations where males matured at age 3 or better.
Instead of all our throwbacks being spawners, now it's just our keepers.. Spawning success from hot oil? Not so good.
Sea bass were far more prolific off DelMarVa when the entire marine population was in the spawning class.
Recent issues with survey equipment have created 'experiments' off Maryland's coast where large areas of habitat had virtually all sea bass driven out. As these areas recolonized, sea bass again reverted to age one spawning...
(I wrote about this at length in my 6/22/18 report if you'd care to dig deeper..)
There was a time when I fully believed our sea bass off DelMarVa were at "Habitat Capacity" - that we just couldn't hold many more UNLESS WE BUILT MORE HABITAT.
That was in the early 2000s. Every reef built in the 1990s & into the early 2000s was swiftly colonized by sea bass capable of spawning.
We even had 1/2 day boats occasionally catching boat limits at 25 fish per-person when the 12 inch and 25 bag limit first started in 2002.

But sea bass were already maturing later. As soon as all reefs, even the hardest hit--pounded daily by 1/2 days boats; as soon as even those reefs were populated by 12 inch sea bass -- by 2003 the little guys ceased to be. They would not transition to male until 11.5 inches or better. Because they also grow fast, relative to their max size, these just-maturing fish become legal soon after.
Where once reefs/wrecks with amazingly heavy pressure STILL had a strong spawning contribution to make, suddenly the entire inshore spawning population (or dern near all of it) was being removed..
We're experiencing a spike in spawning production now; where it was All Hands On Deck for spawning as the MD Wind Energy Area recolonized. Hopefully the African Queen Reef will follow suite as it seems the Navy is not returning with the Sheila Bordelon this year.. (Knocking wood..)

An amazing tool. Incredibly powerful. Management can FORCE sea bass to spawn young.
But because to do so requires LOWERING our size limit to match the commercial limit of 11 inches, getting NOAA et al to even consider it has been impossible.
After all, they have to keep a sharp eye out for Overfishing. Maybe this year's catch estimates will show kayaks outfishing all commercial trawl.
In an estimate system where shore fishers commonly have the largest average sized sea bass catches, any illusion of catch is quickly assigned the title, "Science."
Would that population biology & ecology might take catch estimate's place....
Regards,
Monty