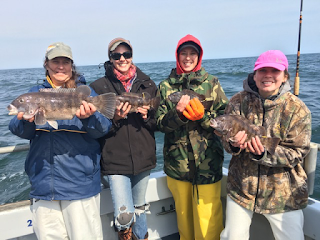 Fish Report 3/27/17
More Tog Trips, &
Another Mackerel Trip
Sea Bass Reservations Open
MRIP & A Brutal Passage From Crevecoeur
Tog Trips:
Long-Long Tog - Thursday, March 30th - 5:30 to 5:30 - $150.00 - 16 Sells Out
Inshore Spring Tog - April 1st, 2nd & 3rd - 6:30 to 3:30 - $120.00 - 14 Sells Out
If interested in tog trips, read this business below. Toggin ain't sea bassin. IT IS NOT EASY FISHING (except sometimes..)
MACKEREL TRIP:
Wednesday, March 29th, 8 to 2, $60.00
Reservations Required at 410 520 2076 - On My Rig You Can Reserve What Spot You're In. Please See http://morningstarfishing.com For How The Rail's Laid Out..
LEAVE YOUR BEST POSSIBLE CONTACT NUMBER - Weather Cancelations Happen - I Make Every Attempt To Let Clients Sleep In If The Weather's Not Going Our Way..
The reservation book for sea bass season is open. Taking reservations for opening day May 15th to May 31st.
Be a half hour early! We always leave early!
..except when someone shows up right on time.
Clients arriving late will see the west end of an east bound boat. With a limited number of reserved spots, I do not refund because you over-slept or had a flat..
My Crew Have (usually have!) White Crabs For Sale AT THE DOCK for the low, low price of just $5.00 per generous dozen. There Is No Guarantee We'll Have Whites For Any Trip. Sometimes they all die. That shrinkage is why I prefer greens. We may be bringing some whites with us in the ocean. Green Crabs (not Whites!) Remain Provided As Boat Bait And Are Included In All Fares. Reservation staff hardly know what species we're after, let alone whether there will be a certain kind of bait.
Skunks are always possible while tog fishing.
Really. It's a frequent occurrence. Sometimes even the very best toggers get their head handed to them despite folks all around having done well.
Then too, sometimes the whole boat can do very poorly.
If you can't take the heat, and there ain't much of that either, stay out of the kitchen.
Going Toggin Anyway! Tog Only, Sea Bass Are Closed Because NOAA Has Absolutely No Real Idea (but learning) How Best To Manage The Fishery.
No Live Tog Leave The Boat - Dead & Bled - Period. (I Believe The Live Tog Black Market Has Hurt This Fishery ..But Nowhere Near As Much As Bad Sea Bass Regulations)
Agreed With Or Not, All Regulations Observed – Maryland: 4 Tog @ 16 Inches
If You Won't Measure & Count Your Fish, The State Will Provide A Man With A Gun To Do It For You. We Measure & Count — ALWAYS — No Exceptions!
It's Simple To Prevent Motion Sickness, Difficult To Cure. Bonine seems best because it's non-drowsy. Truly cheap & effective insurance.
Honestly - If you get to go on the ocean once month, once a year, or even less; why risk chumming all day? Similarly, if you howl at the moon all night, chances are good you'll howl into a bucket all day.
Bring A Cooler With Ice For Your Fish – A 48 Quart Cooler Is Fine For A Few People. Do Not Bring A Very Large Cooler. We DO have a few loaners - you'll still need ice.
No Galley! Bring Food & Beverages To Suit. A few beers in cans is fine for the ride home.
In winter waterproof boots are almost a necessity. (and great socks! like over the calf smart wool .) While some rarely, or never, wear gloves for fishing, you'd not likely see me fishing this time of year w/o at least the half-finger wool gloves.
Layers are best because, believe it or not, sometimes it can be very pleasant offshore--especially when the wind lays down. In winter it's warmer offshore owing to warmer waters. In summer it's cooler..
If you know anyone with pallets of unsalable block, I know a toggy place or two we can store them. Forever. Will pay for trucking.
16,968 Reef Blocks deployed at numerous sites: TNC's Restoration Reef 278 - Doug Ake's Reef 3,193 - St. Ann's 1,585 - Al Giles/OC RUST Reef 1,185 - Eagle Scout Reef 919 - Sue's Block Drop 247 - Nichols' Concrete 852 - Capt. Bob's Block Drop 676 - Benelli Reef 341 - Capt. Bob's Reef 393 - Wolf & Daughters Reef 210 ..
Twenty Three Pallets of Block Were Recently Donated by DelMarVa Power - Thank You!
Blocks are a small part of what we're doing. Prefer bargeloads of substrate but believe any forward motion is good..
Support the Ocean City Reef Foundation! http://www.ocreefs.org The OC Reef Foundation (OCRF) is a 501c3 non-profit with no payroll & no rented office space -- We Build Reef. Also registered w/Amazon Smile. We're Nowhere Near Reef Building's True Potential. Thank You!
On Facebook now too (A little. Sometimes.) Morning Star Fishing https://www.facebook.com/ocfishing/ & OCRF  https://www.facebook.com/Ocean-City-Reef-Foundation/
Seen on the web: "We already know all that. NOAA already does catch estimates. Why do them differently?"
Greetings All,
Mackerel fishing didn't work out last week. Water temps actually fell after that major blow. I suppose they're back south of us again? Going to keep trying once in a while. Capt. Ricky, a contemporary of mine up in DE at Fisherman's Wharf, was out mackerel fishing Saturday. They at least got to see what the fish look like. He & I both remember what it used to be; both fished for them as captain before their sudden collapse..
On one of our recent tog trips we had pretty good action if mostly on shorts. Very good, considering the winter's average. Water was just a little warmer that day. One day soon that warmer water will be 'normal.'
Also had two days, three really, where the weatherman & Mr. Murphy (of Murphy's Law) were in collusion. (new vocab word?) Seems 'light westerly wind' means "Come on out & get your butts kicked boys!"
Did.
Another day, just as we were getting a resurgent bite, the wind stiffened instead of falling-out as forecast. Then a mate gets a call that his gal's in the Emergency Room -- upped anchors quick for that.. (She's A-OK!)
Overall, a handful of tog. Some keepers. Certainly no limits.