Fish Report 2/7/20
Adding Tog Trips
A Letter To Secretary Ross
Honest truth about Tog Trips!
Do you like a good old fashioned 'drop and reel' sea bass bite? Like steady action?
Yeah, umm, toggin/blackfishing ain't that. (Except in the rarest of occasions!) This fishery, tog fishing, is the hardest from among my target species. Skunks can and do happen! Even skilled tog fishers, and I mean from among the very best, can get their head handed to em. Worse still - I've even been completely skunked while tog fishing! (Whoever said "A bad day of fishing is better than a good day at work" dern sure didn't carry fishing parties for a living!)
Still, because the challenge of catching tog is both our test & attraction - we go!
Last winter I had several of my best blackfish trips in YEARS. This year already too.. That DOES NOT MEAN IT'S ABOUT TO HAPPEN AGAIN!! ("Ah, Capt, I thought we'd catch 20 pounders today?") Oh Mercy! I'm just glad if clients get bit!
I'm telling you here - I had many, many anglers get skunked last winter and this year also.
This fishery is tough!
A few weeks back a well-skilled client had 5 double digit fish - yet some of the Very Best Tog Anglers I Know Were Skunked The Same Day!
It's a brutal fishery.. As I saw on FB recently, "the tug is the drug.."
I run Tog Trips light so anglers can move to the bite - or try too!
For those in need of the blow-by-blow catch reports, I post after every trip to facebook..
If you want a spot call. Emailing me is no good - service handles reservations. I do ck email for questions - rarely ck FaceBook messenger, maybe 2x a week..
Tog (Blackfish) Trips Only - allowed zero sea bass. They're closed now because of bad MRIP catch estimates.
Tog Trips Saturday Feb 8 - and Wednesday Feb 12 - Winds falling out early AM (Supposedly!) - Both Days 8 to 5 - $150.00 - 14 sells out..
Reservations Required at 410-520-2076
IF YOU BOOK LEAVE YOUR BEST POSSIBLE CONTACT NUMBER & LISTEN TO YOUR MESSAGES -
Weather Cancellations Happen - I Make Every Attempt To Let Clients Sleep In If The Weather's Not Going Our Way..
Be a half hour early! We always leave early!
..except when someone shows up right on time.
Clients arriving late will see the west end of an east-bound boat.
With a limited number of reserved spots, I do not refund because you
overslept or had a flat..

Bait is provided on all trips: green crabs for tog. (Whites Are
available from crew for a reasonable cost..) Our Tog Pool Is By Length: A Tog That's Been Released Counts The Same As One In The Boat. 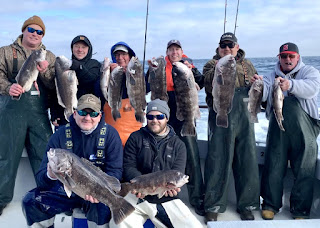