Fish Report 7/21/19
Summer Cbassing
Help Wanted
An MRIP Comment
Reservations Open Through September 14, 2019.. Sundays through from Aug 11 to Sept 15 are closed/held in reserve for special trips.
Am looking for a fill-in deckhand also. Email if interested!
Sailing Daily For Sea Bass Weather Permitting (Sakes!) Flounder/Fluke should be OK by now - they are not, Not Yet! Saturday's 6:30 to 3:30 - $125.00 –Otherwise 7 to 3 at $110.00..
Fishing's mostly been a matter of catching a nice fish fry's worth.. 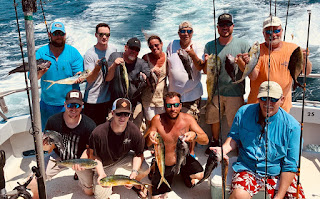 Reservations Required at 410 520 2076 - LEAVE YOUR BEST POSSIBLE CONTACT NUMBER - Weather Cancelations Are Common - I Make Every Attempt To Let Clients Sleep In If The Weather's Not Going Our Way..
Be a half hour early! We always leave early!
..except when someone shows up right on time.
Clients arriving late will see the west end of an east bound boat. With a limited number of reserved spots, I do not refund because you over-slept or had a flat..
Bonine Is Cheap Insurance! "Natural Dramamine" Does NOT Work!
It's Simple To Prevent Motion Sickness, Difficult To Cure.  If You Suffer Mal-de-Mer In A Car You Should Experiment On Shorter Half-Day Trips First..
Bring A Cooler With Ice For Your Fish – A 48 Quart Is Fine For A Few People.
No Galley! BYO Sandwiches & Soft Drinks. A few beers in cans is fine. (bottles break at bad times)
If You Won't Measure & Count Your Fish The State Will Provide A Man With A Gun To Do It For You. We Measure & Count — ALWAYS — No Exceptions!
http://www.ocreefs.org
We're Nowhere Near Reef Building's True Potential.
If you have a few blocks in the backyard taking up space and just making snake reef, bring em. We'll toss em overboard with the rest.
25,996 Reef Blocks have been deployed at numerous sites as of 7/10/19..
Here are sites currently being targeted: Capt. Jack Kaeufer's Reef 787 - Doug Ake's Reef 3,805 - St. Ann's 2,284 - Sue's Block Drop 787 - TwoTanks Reef 782 - Capt. Bob's Inshore Block Drop 900 - Benelli Reef 940 - Rudy's Reef 185 - Capt. Bob's Bass Grounds Reef 1,604 - Wolf & Daughters Reef 688 - 327 at Al Berger's Reef..
Greetings All,
Am having some very fine days, even had a shot of peanut mahi today.
Am also having some dead slow days!
Derned if I can figure it.
Flounder haven't come on yet--not for the average angler anyway! Hope that happens soon. Even then there will days they chew & days they don't. I've never been able to predict what will bite & when - we go fishing.. The mahi we had 7/21 were a gift and will not be a regular part of our catch.
Presently giving folks the very best day I can given sea bass's willingness to chew..
Below is a singularly important comment about our recreational catch estimates. They've become so badly inflated that fishery scientists & managers haven't any real idea of our catch; and, more importantly perhaps, these MRIP estimates are now inflating fish population estimates as well.
This year, for instance, commercial fishers received a 49% increase in summer flounder (fluke) quota. That's HUGE & those fish are going to get caught - promise.
Recreational anglers saw no increase because "we're already catching ours."
How bad is it? It's entirely possible that the supposed 60% commercial/40% recreational quota division is more factually 15% rec/85% commercial. That's how high, how grossly overinflated, MRIP's catch estimates are..
I've been hammering at this issue over 20 years. Right now seems the most likely to see real action taken to repair our estimates  ..but I've thought that before.
Comment period ends 7/22/19, but the fight will go on & on & on....
Regards,
Monty
Capt. Monty Hawkins
Partyboat Morning Star
OC MD
mhawkins@morningstarfishing.com
******************************************************
******************************************************
You can send a comment too..
nmfs.mrip@noaa.gov
Greetings Admiral Gallaudet & everyone else too!
MRIP should be discarded immediately after a hearty public flogging for crimes against fisheries science, fisheries management, & theft of full potential for all US East Coast & Gulf Coast marine recreational fisheries.
Comment by Capt. Monty Hawkins, Partyboat Morning Star, OC MD, on NOAA's Marine Recreational Information Program--MRIP--which replaced NOAA's previous program, the Marine Recreational Fishing Statistics Survey--MRFFS--in 2012. At question is whether MRIP can be considered scientifically suitable as demanded of the "Quality of Information Act."

In 2011 I wrote of these MRFSS estimates: "Just these 5 data sets, wildly divergent from the mean & incredibly divergent from the historical trend of for-hire fishers catching more sea bass than the private boat fleet; These few sets alone account 812,000 fish above the mean, a substantial part of the modern recreational quota. Just this difference is more than twice as many sea bass as the entire Mid-Atlantic party/charter fleet is said to have caught in all of 2010."
Now, with MRIP having undergone two "recalibrations," these five single-state/single-mode (Private Boat) two-month 'wave' periods in 2010 are now 2.49 million fish higher than with MRFSS; and, in total, 3.44 million fish are now shown by this pathetic 'repair' of MRFSS.

The true harvest of black sea bass is primarily by Party/Charter.
Even in states like MA where Private Boat harvest is significant, no For-Hire skipper I've spoken with thought Private Boats catch more sea bass except on summer Saturdays when Private Boat effort spikes ..yet MRIP has just these five single wave sets as 2.97 million more sea bass than all Party/Charter's 0.474 million from Cape Hatteras north..
It's quite likely the For-Hire estimate is also too high. Even though we tell NOAA what we caught, they add handsomely to Recreational VTR reported landings - It's the other ghost in NOAA's closet: unreported For-Hire effort.

Did Maryland Shore fishers land 178,000 lbs of sea bass in Sept/Oct 2016 that averaged 1.4 lbs apiece? (No! They caught, near as I can tell, ONE legal sea bass from shore. It was 12.5 inches or a bit over half a pound.)
Did New York Private Boats land six million lbs of sea bass in 2016 & 2017? (No! One state's highly regulated private boats could not land more sea bass than all commercial trawl & trap..)
What's the chance 1.6 M lbs of cod crossed recreational docks from NY Private Boats in hearty winter weather, and their Partyboat fleet didn't get in on it.. (Zero. There's no chance that happened.)
In 2017 MRIP has MA & CT at nearly a million pounds of shore caught striped bass while Rhode Island's shore landings were only 3/4 of a million - but get this - here's the "Average Size" of those shore-caught stripers.. CT 19.6 lbs - MA 33.4 lbs - RI 33.8 lbs..
And the grand prize for "Average" Shore caught stripers is RI in 2018 at 45.1 lbs! (Nice! Would that it were true..)
In Delaware's estimates last year, 2018, sea bass caught from Shore 'averaged' 1.9 lbs! (Yeah, No. That didn't happen either..)

There is No Recreational Marine Species that's not affected by MRIP's estimates. This statistical baloney is positively blinding fisheries science.
It has to stop.
It has to get repaired.
MRIP is the worst possible result from Congress's 2007 intent to repair or replace MRFSS.
MRIP cannot possibly meet the Quality of Information Act's standards.