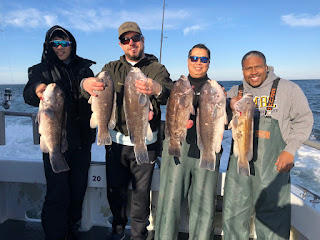 Dr. Ben Strahl of BerlinMD - Jason Penn of Pikesville MD - JoJo from Brooklyn NY - & Cho Hyun of Fairfax VA enjoyed last week's 10 hour trip..
Trips Also Announced on Facebook at Morning Star Fishing https://www.facebook.com/ocfishing/ & my personal page..
Tog trips in December were hardly world class affairs. Catch? Yes, usually, but not great; not what I'd like. A few guys have limited. Some keeper females have gone back. It is a fishery for the passionate...
Tog Trips:
Friday, 1/4/19 & Sunday, 1/6/19 - 10 Hours - 6 to 4 - $130.00 - Sells Out at 16. (Saturday looks to be a blow day)
Monday, 1/7/19 - 12 Hours - Depart 4:30 - $160.00 - Sells Out at 16...
Reservations Required at 410 520 2076 - Staffed 24/7 (Asking me for a reservation via FB or Email is a guaranteed way to wrench up the business! Use the reservation line!)  On My Rig You Can Reserve What Spot You're In. Please See http://morningstarfishing.com For How The Rail's Laid Out..
LEAVE YOUR BEST POSSIBLE CONTACT NUMBER & LISTEN TO YOUR MESSAGES - Weather Cancelations Happen - I Make Every Attempt To Let Clients Sleep In If The Weather's Not Going Our Way..

Bait is provided on all trips: green crabs for tog. (No white crabs at this time. Maybe soon?) Rental Rods are $7.00 - Each A Rod I'd Use Myself..
Wear Boots! Sneakers this time of year can ruin your trip... 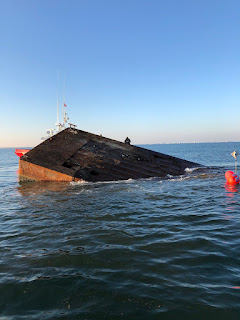 New Year's Greetings All,
Sea bass closed, be toggin now every chance I get. Will also do a few picture/binocular trips for my birdwatching friends, but blackfish will hold the upper hand.
It's a shame really. So many times over the years, even since 1998, I've written about NOAA's catch estimating programs and how they are upending fisheries.
Here's an example close to many readers heart this time of year - how a statistical mistake in one fishery upends another..
In 2009 Pat Kurkul (Regional Administrator for NOAA Fisheries) declared an Emergency Sea Bass Closure based on MuRFFS catch estimates from that year & 2008's two fall/early winter periods.
The estimates were absolute nonsense. But, if your sense of fish removals comes only from a computer, you see that wickedness we recreational fishers have become famous for over the last decade -- Overfishing.
Yup, even just New Jersey tog fishers --and only those fishing from Shore!-- outfished All Party/Charter/Trap/Trawl for the year in 2010  ..and that astounding feat was accomplished with just their March/April NOAA-estimated catch.
I'd be embarrassed to death to have to regulate fisheries with such statistics.
In the case of sea bass, Private Boats of one state or another are always shooting past all commercial landings. Most years recreational Private Boats north of Hatteras outfish all Trawl/Trap/Party/Charter for the year.
With the lowest bag limits and longest size limits ever - recreational Private Boats are "estimated" to decimate entire regional populations.
Yet, inexplicably, sea bass populations keep growing where these brutal 'overfishing' extractions are said to be worst..
So Pat Kurkul's 2009 sea bass Emergency (an illusion on a computer) became 6 months of factually closed season. It very nearly bankrupted me - my boat had lots of Oct/Nov already sold and all those clients were suddenly needing refunds.
Fished tog that October. We were allowed 4 fish. Sometimes it was outrageous. It was never crowded. Fished close.
Wasn't just me. We all had to run trips or fail.
And just like that, our inshore tog were grossly overpressured.
Just our Oct/Nov/Dec tog removals of 2009, had they NOT been captured, would be today's 15 to 20 pound fish. Owing continued sea bass closures, the pressure on tog never let up.
If you want abundant tog, and especially big tog, you have to take it easy.
Where Capt. Kane & Ken Westerfield caught the world record was the second place I ever threw back huge tog. We used to keep sea bass for dinner and often put ALL our tog back.
But that was before regulation came to help.
Where in tog fishing-pressure is detrimental; in sea bass I believe fishing pressure is key to expansion. Was, anyway. Sea bass used to respond to fishing pressure by spawning younger.
Used to.. (see Fish Report 12/11/18 (and many others) for deeper explanation of that claim. I've worked on it for 15 years..)
In the early regulatory period (self regulation beginning in 1992, state/fed in 1997) and up until 2001 or so, all sea bass found in the ocean in summer were spawners.
All of them.
Especially the thousands we often threw back every day.
Since the size limit went to 12 & then 12.5 inches (regulatory tightening owing, of course, to catch estimates showing recreational overfishing!) ..since 2001/2002 I'd estimate about 20% of marine-found summer sea bass are engaged in spawning. This is based on my observations of when male sea bass begin showing color--that familiar 'nuchal hump' we see in males -- the knothead..
Whether threat of harm prevents younger fish from becoming spawning males as is common all across biology (larger male sea bass are said to spine smaller males - aim for the eyes - and isn't this a 'protection of the harem'? Consider how common the behavior of males competing for 'spawning rights' is - two mountain goats duking it out sort of competition) ..or simply some chemical/pheremonal response created by larger males that says, "Thou Shall Not Spawn" to smaller fish.. Regardless: where we used to see hundreds of under 9 inch male sea bass a day - even a thousand male throwbacks; I've often gone a year with less than 10 sightings of small males in the past decade.
Since the size limit hit 12 inches, Sea Bass Spawning Production Has Decreased. Big Time.
In that early period there were no bag limits. Clients were allowed & wanted as many sea bass as they could find over the era's smaller size limits.
Despite far greater fishing pressures from both commercial & recreational in that era, DelMarVa's sea bass population rose spectacularly. In 2003 my entire boat limited at 25 per-person far more often than not.
Today we focus on flounder (fluke) much of the summer. Sea bass fishing pressure from commercial fishers is lower across many areas of our region's habitat. Our bag limit is lower. Someone catching a sea bass limit is super rare in summer.
Yet sea bass populations here fluctuate minimally.
We've taken their urge to spawn young and squandered it.
"No, no, no!" a leading biologist will say. It was just a lucky spawn that lead to that abundance.
NOAA paycheck. He wins.
We lose.
So do the fish.

Again & again MuRFFS/MRIP Recreational Catch Estimates have stuck a pointy stick in fisheries science's eye. The ONLY Reason we went to a 12 inch size limit was management's attempt to limit recreational catch - what they "had to do" based on catch estimates.
States above DE Bay all have higher size limits than that. Even 15 inches...
No One In Management Or Fisheries Science Can See The Truth Of Regulatory-Based Biological Response If Their Only "Truths" Are Colored By Catch Estimates Bordering On Lunacy.

Well, to that end the Senate passed The Modern Fish Act. Haven't heard whether the President will sign it.
One thing it requires is that a report be made every two years detailing progress MRIP (Marine Recreational Information Program - our catch estimates) has made achieving recommendations made in the 2017 NAS (National Academy of Sciences) Report.
Looked to me like the NAS luved MRIP.
There were no fishers involved with the NAS report. I have no idea if our comments were read by committee members.
With estimates which, within actual published numbers, can vary from zero to several million given PSE (percentage standard error - similar to a political poll's +-3% except incredibly greater) ..with PSE showing a spread of literally millions of pounds for just one small sub-set of a fishery in only two months -- it is "Scientifically" correct, even Statistically Perfect.
"What's not to luv?" said the NAS..
Sure is odd. Fact: MRIP says NY Private Boats caught, in Nov/Dec 2017, somewhere between Zero & Seven Million Pounds Of Sea Bass. That's the PSE spread.
Perfect. I'd also guarantee that is a True Estimate. The "True" part being a heck of a lot closer to zero than 7 Million!
But managers have to use the centerpoint. That estimate alone's a little over 3 million pounds of quota killing horse feathers. Our entire 2018 quota, or "Recreational Harvest Limit," from Hatteras north was only 3.5 million pounds. And New York Private Boats (that no professional skippers saw while factually out fishing) took nearly its entirety in two cold months..
Catch that never happened has crept into fisheries restoration efforts everywhere - and nowhere been helpful. There's so much Bad Statistics involved, management hasn't a prayer.
That means we don't either.
As it turns out, I'm pretty sure the Monitoring Committee (mid-level scientists) tossed that NY estimate. I think. Not sure if it's ever happened before.
Needs to happen a lot.
But Fisheries Regulation has a far higher power now - has for about 10 years I think. The SSC (Science & Statistical Committee or "super-smart scientist committee") has, always before, held MRIP, & MuRFSS before it, as infallible.
The truth of our catches would often allow more robust fisheries. Sometimes too it would tighten where needed. But, management having the truth of it, tightening would be best..
I am hopeful The Modern Fish Act will help us with MRIP.
But I was hopeful in 2003, 2006, 2007, 2011, 2012, & 2017 -- before all changes to our data and before NAS Reviews. Congressionally mandated repairs have all failed.
Instead, Recreational Catch Estimates have grown far worse.
Perhaps even Fouled Up Beyond All Repair (FUBAR)..
Yup. That bad.
Winter will allow some research & advocacy.