Fish Report 12/14/2017
Couple Days Looking Good.
Opening December Sea Bass Trips By Announcement Only.
On Facebook these days too..
Calling for a calm; opening Sunday, December 17th & Monday, December 18th to Sea Bass trips. Leave 6:30 - Return 3:30 (ish.) Fare $110.00 -- Bring ICE. (Yes, even in December!)
ARRIVE 1/2 HOUR EARLY! We'll want an early start. Pretty rare for me to get home on time..
Reservations Required at 410 520 2076 - LEAVE YOUR BEST POSSIBLE CONTACT NUMBER - Weather Cancelations Are Common - I Make Every Attempt To Let Clients Sleep In If The Weather's Not Going Our Way..
Be a half hour early! We always leave early!
..except when someone shows up right on time.
Clients arriving late will see the west end of an east bound boat. With a limited number of reserved spots, I do not refund because you over-slept or had a flat..
Bonine Is Cheap Insurance! Crystalized Ginger Works OK For Some. "Natural Dramamine" Does NOT! It's Simple To Prevent Motion Sickness, Difficult To Cure.  If You Suffer Mal-de-Mer In A Car You Should Experiment On Shorter Half-Day Trips First! (Wockenfuss Candies sells crystalized ginger locally at the White Marlin Mall location (also the post office most OCRF mail goes through) - We usually have some aboard. Chewable Meclizine is a good pharmaceutical, chewable Bonine's a "less drowsy" meclizine pill; prescription Scopolamine Patches are the gold standard.)
Bring A Cooler With Ice For Your Fish – A 48 Quart Is Fine For A Few People.
No Galley! BYO Sandwiches & Soft Drinks. A few beers in cans is fine. (bottles break at bad times)
If You Won't Measure & Count Your Fish The State Will Provide A Man With A Gun To Do It For You. We Measure & Count — ALWAYS — No Exceptions!
Please Support the Ocean City Reef Foundation!
http://www.ocreefs.org
We're Nowhere Near Reef Building's True Potential.
If you know anyone with pallets of unsalable block, I know a fishy place or two we can store them. Forever. Will pay for trucking.
If you have a few blocks in the backyard taking up space and just making snake reef, bring em. We'll toss em overboard with the rest
19,437 Reef Blocks deployed at numerous sites as of 11/12/17: TNC's Restoration Reef 278 - Doug Ake's Reef 3,328 - St. Ann's 1,928 - Al Giles/OC RUST Reef 1,490 - Eagle Scout Reef 970 - Sue's Block Drop 569 - Nichols' Concrete 1134 - Capt. Bob's Inshore Block Drop 705 - Benelli Reef 418 - Capt. Bob's BG Reef 760 - Wolf & Daughters Reef 220
This Bill FIGHTS BAD RECREATIONAL CATCH DATA!!!
Support the Modern Fish Act..
http://www.sportfishingpolicy.com/tell-your-member-of-congress-to-support-the-modern-fish-act/
Honest -- Your Reps would be GLAD to hear from a real constituent as opposed to a mass-mail post card or, especially, lobbyist.. 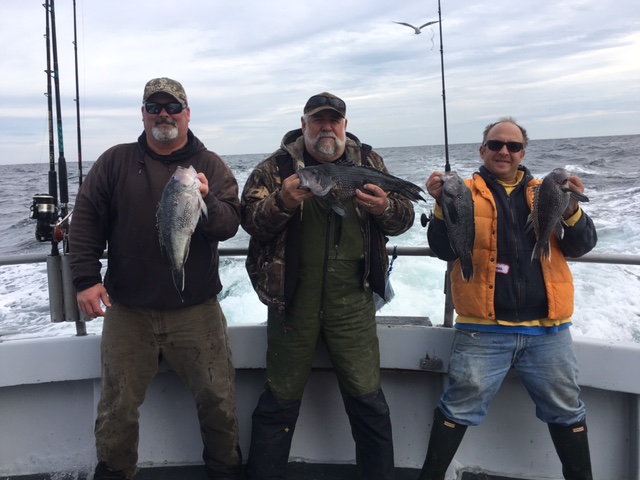 James Bovis, Mike Zeigler, and Ken Monson limited out in fine style on Pearl Harbor Day..
Greetings All,
Had 'one stop shopping' our last trip out. In an hour early with a boat limit of delicious black sea bass. Now, because Mom hasn't had fresh fish in 4 or 5 days, an emergency approaches.. (nice to weigh emergencies thusly..)
Weather's held us in a while - colder too, but I think sea bass are still plenty doable.
Slip on offshore Sunday & Monday. See above for booking info.

Soon we'll start our winter reef building block trips. When the wind's OK for a nearshore block trip, but not for an offshore fishing fishing trip, we'll load the boat with reef blocks or a mooring - whatever needs done - and head off.
If you want notification of those trips see ocreefs.org & on Facebook too. There's an email signup & of course, a news feed for FB.
Begin toggin January 1st. That fishery's weather dependent . . I have no patience for innumerable reschedules. If you have an opportunity & I post a trip that fits in your schedule - make a reservation & off we go. Unlike sea bass/fluke spring/summer/fall season, booking weeks in advance in winter gives reservation staff nightmares. It's not everyone's favorite way of booking reservations. Just how I do trips in the winter.
I do not think this will be the togging of our dreams. Probably an epic day or two; but, owing management's inability to grapple sea bass production, pressure on tog has been unrelenting. Our reefs are being fished even during the Maryland closure by boats allowed smaller tog & more of them.. (c'mon regional regulation..) There are several months more pressure on tog today than before NOAA's recreational catch estimate statistics 'spotted' rampant overfishing of sea bass and caused an emergency closure in 2009.
That 'overfishing' is spotted every year now. Last year, for instance, New York's Private Boats were said to have taken 2X more sea bass just in Nov/December than ALL Party/Charter from Maine to North Carolina - All Year! There's also the sharp-eyed statistical assertion of Maryland Shore anglers catching 50,000 pounds of sea bass - far more than MD Party/Charter..
It's a bit difficult to explain how these jumbo sea bass were landed in such number where they, in fact caught none; but so far managers are rolling with it -- that's what NOAA tells them to do.
This year too has it's spikes - its statistical outliers in sea bass catch. They're being ground through the system as I write. I've not heard of devastating consequence yet - perhaps there will be no medieval mace to the head for sea bass fishers this year.
Sea bass would be open longer, probably year round, and more prolific if managers would abandon their 'certain knowledge' from MRIP recreational catch estimates.
Restoring sea bass production would lower tog effort.
Now, to be sure, there ARE a lot of tog. They've colonized every reef we've built and are even increasing on reefs we did not build -- they're just not double-digit fish!

When the population of tog was steadily rising--and the SIZE of our tog was increasing to enormous--it owed our self regulated 3 fish @ 16 inches; and, much more importantly, sea bass fishing that was too good to pass up.
Sea bass you say? Over tog? Surely you jest captain..  After hurricane Sandy we had one winter where we were allowed sea bass in Jan/Feb. I was fishing a 12 ounce hammered spoon with a hook on each end & catching doubles of JUMBO sea bass.
People I would never have believed capable put down their crab & made cbass drops -- the most die-hard of die-hard toggers.
For the rest of us, switching to nice doubles is no contest.
Point is - and this is everywhere in fisheries - closures simply shift pressure. They might shift it to another state, or another species -- I think, am positive, we've taught a LOT of people NOT to go fishing in the fall - so we've shifted that pressure to who knows what: there a closure creates a complete economic loss to the recreational fisheries. Closures based as they are from statistical hallucinations of incredible catch from places we fishers do not believe possible -- it's opportunity lost for good . .

Always lobbying someone for hardbottom reef restorations in the Mid-Atlantic; Tuesday the Ocean City Reef Foundation was awarded a 'Gold Star' by the Maryland Coastal Bays Program.
In the room was the heart of coastal Maryland's environmentally-minded citizenry, .org leaders, and several politicians including MD DNR's Secretary Belton, Senator Jim Mathias, & a regional rep for Dr. Andy Harris I've known for years.
It was kind of MCBP to give us the award -- As I stepped to the front of the room I knew I had to seize to opportunity--for even here, among these folks who know so much more about our region's ecology than I'll ever master, even these folks likely had little idea they were within 7 miles of a coral reef  ..and they almost positively had no idea the battles they were fighting for estuarine water quality were so far behind that we'd already seen the ocean turn green.
It was a good day for broadening knowledge..
I've included my follow-up letter below.
Regards All,
Monty

Greetings,
Met Secretary Belton at the MD Coastal Bays report card unveiling. Our tiny Reef Foundation received a 'gold star' which gave me a chance to quickly address the room about the greening of the Mid-Atlantic Ocean..
Aside from the tale so clearly told by where marlin feed today vs historically--aside the fact anyone targeting billfish today where his grandfather once caught them would be laughed off the dock--we can see greening other ways too.
An airline pilot told me he'd flown the route from Newark, NJ to Disney/Orlando since it had opened circa 1972 .. When he began he had blue ocean on both sides southbound. By the time he retired, the ocean was green on both sides. He'd watched it happen..
Is it getting worse?
Absolutely.
Capt. Jerimiah Kogon, a young man by our standards, Jeremiah used to take dive parties to artificial reef at Russell's Reef barely 5 miles out. A few years ago he had to give those trips up & instead takes them to the Bass Grounds some 9 miles out.
We're not talking about blue/green - simply the ability to see  ..when his clients no longer could, he had to move further off.
It's what EVERYONE who uses our part of the ocean does - go further. (Except horseshoe crabbing..)
I'm a "seeing is believing" sort - a "show me" guy. I can see, even with a tiny population of oysters, how much clearer our back bay waters are along the rocks where oysters live
..and I can imagine a Chesapeake with an equivalent to its historical oyster footprint filtering to create a blue sea.
Used to long decades & centuries ago - Will again.
Recent successes, just like successes described to me 25 years ago of oysters growing on tires so thick a diver could not get an arm into the hole; today's successes owe to robust substrates with vertical profile -- and not a tiny substrate laying flat on the bottom as a mini mud-trap.
Was a lot of CAN'T not too long ago - Can't restore oysters.
Now you know we can.
But to really amp-up the program will require watermen being on board.
That will require monetization of massive biofilter reefs where harvest is not allowed (at least for the foreseeable future).
BUT - there's bound to be spawn thrown by those biofilters in quantities we've yet to imagine.
There's where biofilters can be monetized -- in capturing spat.
I've presented the idea of using deneedled Christmas trees before. Carson Beldin (sp?) used trees sprayed w/wet cement back in the 1970s to such good affect, he thought it a retirement plan.
Today there's an article on using them as freshwater habitat. http://www.thefishingwire.com/story/420431
I don't live on the Chesapeake. I'm waaaaay downstream suffering affects of a lost bivalve community.
I see a time when hundreds of polyballs, each with even 4 or 5 lightly cemented Christmas trees suspended & well anchored are providing habitat even as they begin to gather future profits - a time when "spat traps" begin to gain steam.
One day we'll see those trees closest to the bottom -- actually see them. Take some clean water..
After spawning and spat settlement the trees would be removed to secret locations where they would continue to provide  complex habitat throughout their existence & especially during oyster grow-out.
Wishbone will never replace the backbone..
Someone's got to try it.
OCRF could kick in if that would help.
Soon be time to collect those trees.
Two or three years later a couple pics of hauled-out trees loaded with oysters......
Cheers All,
Monty
Posted by Monty at Thursday, December 14, 2017