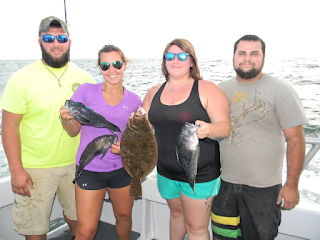 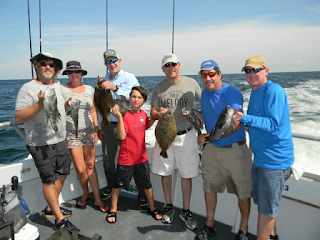 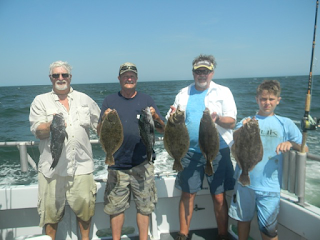 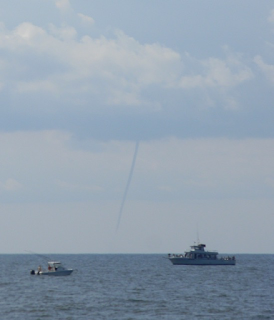 Fish Report 8/27/17
Opening September
Predictably Unpredictable
Challenge To The Data
Opening September To The 21st When Sea Bass Close. Trips as normal.. MIGHT go some more in late September. Will depend on what our flounder are doing.. (or the mahi.. or the goldens.. or, or, or.. Or the Maintenance!)
There are virtually no reservations yet in Sept. All stern spots are open.. (that's because I forgot to open the dang book!)
Summer 'We'll Fish For What's Biting Trips' .. Might be flounder, might be sea bass, might be a mix. (Mostly Sea Bass!) If you absolutely have to have one and not the other, don't reserve!
Sailing Daily - Weather Permitting - Whether Sea Bass or Flounder Bite Better On Any Given Day Has Been Wildly Unpredictable! Saturday's 6:30 to 3:30 - $125.00 – Otherwise 7 to 3 at $110.00..
Reservations Required at 410 520 2076 - LEAVE YOUR BEST POSSIBLE CONTACT NUMBER - Weather Cancelations Are Common - I Make Every Attempt To Let Clients Sleep In If The Weather's Not Going Our Way..
Be a half hour early! We always leave early!
..except when someone shows up right on time.
Clients arriving late will see the west end of an east bound boat. With a limited number of reserved spots, I do not refund because you over-slept or had a flat..
Bonine Is Cheap Insurance! Crystalized Ginger Works OK For Some. "Natural Dramamine" Does NOT! It's Simple To Prevent Motion Sickness, Difficult To Cure.  If You Suffer Mal-de-Mer In A Car You Should Experiment On Shorter Half-Day Trips First! (Wockenfuss Candies sells crystalized ginger locally at the White Marlin Mall location - We usually have some aboard. Chewable Meclizine is a good pharmaceutical, chewable Bonine's a "less drowsy" meclizine pill; prescription Scopolamine Patches are the gold standard.)
Bring A Cooler With Ice For Your Fish – A 48 Quart Is Fine For A Few People.
No Galley! BYO Sandwiches & Soft Drinks. A few beers in cans is fine. (bottles break at bad times)
If You Won't Measure & Count Your Fish The State Will Provide A Man With A Gun To Do It For You. We Measure & Count — ALWAYS — No Exceptions!
Please Support the Ocean City Reef Foundation!
http://www.ocreefs.org
We're Nowhere Near Reef Building's True Potential.
2017 Reef Raffle!! Benelli USA has donated another spectacular shotgun! A Benelli Super Black Eagle II, 25th Anniversary Limited Edition, 12ga 28" in Black Cerakote.. Tix are $10.00 - available aboard and/or email if you want me to mail you some. If you want to sell some, could REALLY use the help...
If you know anyone with pallets of unsalable block, I know a fishy place or two we can store them. Forever. Will pay for trucking.
If you have a few blocks in the backyard taking up space and just making snake reef, bring em. We'll toss em overboard with the rest
We'll have deployed over 19,000 blocks by my next report..
18,871 Reef Blocks deployed at numerous sites: TNC's Restoration Reef 278 - Doug Ake's Reef 3,300 - St. Ann's 1,822 - Al Giles/OC RUST Reef 1,426 - Eagle Scout Reef 954 - Sue's Block Drop 406 - Nichols' Concrete 1122 - Capt. Bob's Block Drop 691 - Benelli Reef 418 - Capt. Bob's Reef 664 - Wolf & Daughters Reef 210

Greetings All,
What a see-saw.. One day we catch flounder pretty as you want (for this year!) ..then I go to similar bottom the next day and catch sea bass. Even when I'm confident we'll catch one and not the other.. Nope. The only thing predictable about this fishing is that my crew & I will give 100% to putting something tasty in your frypan..
Been that sort of year. Staying late a lot of days. Had a screaming current a few days ago. Not much biting. Current backed off, fish bit. Young fellow aboard & badly seasick was not at all happy with me staying late. I had to explain (ahhh..) how the eclipse had thrown my clocks out..
Some days there's just no fixing it; but mostly we're sending everyone home with dinner - a good fishfry w/neighbors or family..
Had a waterspout 8/26/17 about 12 miles SE my position.