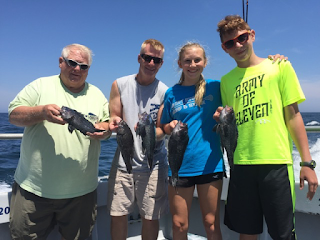 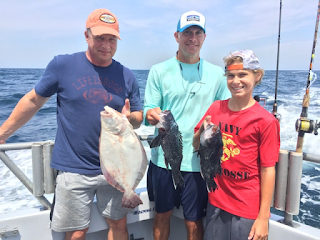 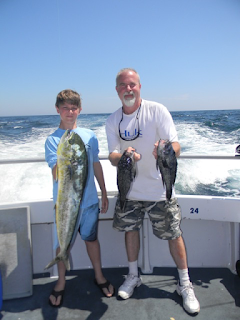 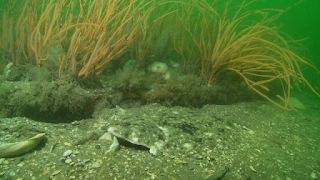 Fish Report 7/16/17
When Will They Bite?
Cbassing Along..
Ship Gone & Now Returned
18,000..
NJ Sidesteps MRIP-Caused Flounder Regs
Summer 'We'll Fish For What's Biting Trips' .. Might be flounder, might be sea bass, might be a mix. (Mostly Sea Bass!) If you absolutely have to have one and not the other, don't reserve!
Sailing Daily - Weather Permitting - (Been mostly sea bass. Nicking a few flounder some days too..) Saturday's 6:30 to 3:30 - $125.00 – Otherwise 7 to 3 at $110.00..
Sunday, July 23, Buy two tickets - get a spot free. This is NOT an offer for any other day - just the 23rd. Last year I was trying to think of how regulars could invite a friend or bring a child/grand-child on a day I'm not booking. Worked. It's especially important new anglers are aware of motion sickness preventatives. Being sick all day is no fun at all..
Reservations Required at 410 520 2076 - LEAVE YOUR BEST POSSIBLE CONTACT NUMBER - Weather Cancelations Are Common - I Make Every Attempt To Let Clients Sleep In If The Weather's Not Going Our Way..
Be a half hour early! We always leave early!
..except when someone shows up right on time.
Clients arriving late will see the west end of an east bound boat. With a limited number of reserved spots, I do not refund because you over-slept or had a flat..
Bonine Is Cheap Insurance! Crystalized Ginger Works OK For Some. "Natural Dramamine" Does NOT! It's Simple To Prevent Motion Sickness, Difficult To Cure.  If You Suffer Mal-de-Mer In A Car You Should Experiment On Shorter Half-Day Trips First! (Wockenfuss Candies sells crystalized ginger locally - We usually have some aboard - Better is Nuts.Com.. Chewable Meclizine is a good pharmaceutical, chewable Bonine's  a "less drowsy" meclizine pill; prescription Scopolamine Patches are the gold standard.)
Bring A Cooler With Ice For Your Fish – A 48 Quart Is Fine For A Few People.
No Galley! BYO Sandwiches & Soft Drinks. A few beers in cans is fine. (bottles break at bad times)
If You Won't Measure & Count Your Fish The State Will Provide A Man With A Gun To Do It For You. We Measure & Count — ALWAYS — No Exceptions!
Please Support the Ocean City Reef Foundation!
http://www.ocreefs.org
We're Nowhere Near Reef Building's True Potential.
2017 Reef Raffle!! Benelli USA has donated another spectacular shotgun! A Benelli Super Black Eagle II, 25th Anniversary Limited Edition, 12ga 28" in Black Cerakote.. Tix are $10.00 - available aboard and/or email if you want me to mail you some. If you want to sell some, could REALLY use the help...
If you know anyone with pallets of unsalable block, I know a fishy place or two we can store them. Forever. Will pay for trucking.
If you have a few blocks in the backyard taking up space and just making snake reef, bring em. We'll toss em overboard with the rest.
Crossed the 18,000 mark with reef blocks on Saturday, July 8th. Dropped those blocks at Jeff Bauer's "Saint Ann's Reef."
18,081 Reef Blocks deployed at numerous sites: TNC's Restoration Reef 278 - Doug Ake's Reef 3,268 - St. Ann's 1,670 - Al Giles/OC RUST Reef 1,350 - Eagle Scout Reef 954 - Sue's Block Drop 322 - Nichols' Concrete 978 - Capt. Bob's Block Drop 691 - Benelli Reef 398 - Capt. Bob's Reef 570 - Wolf & Daughters Reef 210

Greetings All,
Keep thinking I'll have a tale to tell about a wonderful flounder bite.
Still thinking.
A summer sea bass bite has kept most clients busy with an end of the day fish fry. Not great fishing, but not bad either. At least most days..
I think flounder are here. Just need them to put on the feed bag.
Be glad if that were tomorrow!
The ship, Shelia Bordelon, departed July 13. I thought it was over*.
Now it's back again. We have been told it is routine Navy dive training. Sure is a long way from Little Creek, VA.. There are scores of wrecks between our reef sites & the Chesapeake - all available for routine diving. Lot of money too for the Navy to charter a ship. You'd think they have a few.
(*See Fish Report 7/2/17 - 6/24/17 - & 6/19/17 if you're curious why a ship capable of bottom penetrating sonar would be an irritant to both fish & fisher..)
Before departing the ship had set up shop atop an artificial reef Senator Mikulski helped us get back in the 1990s. It stayed there for 4 days. I do not think they were running survey equipment - especially the sub-bottom profiler.
Today, July 16th, the ship is back in the same position -- atop the same artificial reef. You can see it plain as day from the inlet.
After departing the Queen Reef in early July and then returning to our area again, on July 6th I saw the Shelia Bordelon on station north of the Manhattan wreck about 30 miles north of the Queen -- offshore the MD/DE line. I fished nearer & nearer to them. There was no effect on the bite. Apparently they had ceased running their sub-bottom profiler.
On June 29th, however, that was hardly the case. That day they were blasting whatever noise they make. I had to run over 10 miles to escape the affect of their gear. Many boats have reported similar findings at the Queen Reef. MD's nearshore reef complex is in a very bad way.
If the Navy's trying to win hearts & minds of local fishers  -  FAIL.
I am trying to get NOAA & others interested in the sub-bottom profiler's affects on fish.
I am also going to try and make certain this "routine dive training" goes somewhere else next year. We've suffered their business quite enough.
This part of the ocean needs to get real quiet for a while.
I'm not kidding in the least. Black sea bass & flounder have been pushed off habitat -- sea bass even in spawning season -- quite enough.
We could not begin to guess what other affects the past 5 years of survey sounding have had.
My thinking is that the 2013/14/15 Wind Energy surveys; surveys that lasted months & caused sea bass and flounder to evacuate 500 square miles in & around the MD Wind Energy Area; (WEA) those big impactful surveys sensitized our reef residents. When the Bordelon came in August 2016 and started blasting a sub-bottom profiler just 10 miles SW of the MD WEA, fish got the heck out of there.
This year fewer fish returned to the Queen & Bass Grounds reefs.
Then, when the Shelia Bordelon returned yet again (and told me they were running a sub-bottom profiler) sea bass just seemed to evaporate  ..and flounder remain scarce.
To my knowledge, and my direct experience with radar during 100% certain sub-bottom profiler influenced fishing, the sounder's affect on sea bass/summer flounder feeding positively carries at least seven miles. As the source gets closer, the effect intensifies. At two miles or so you cannot get a bite with a sub-bottom profiler running.
I used to be able to fish the Queen Reef several times a month with plenty of people aboard.
Now a skilled outboard skipper can't catch dinner there. (I'm hopeful inshore reefs will recolonize soon if the Navy orders the equipment off - and stays off.)
NOAA, NMFS, Navy, & MD DNR ought to have a little chat about that..
Probably won't though. Just one more failure in a system of fisheries management willing to embrace the absolute falsehoods of MRIP recreational catch estimates, while discounting any ecology or biology that might be brought to the fight.
Go ahead and spend a couple hours googling our natural coral reefs from 10 fathoms to just inside the 100. Ain't any..