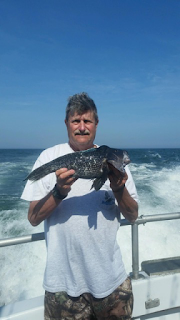 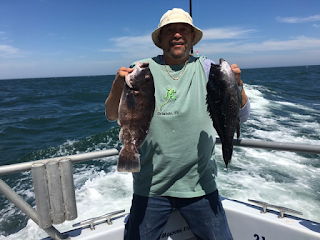 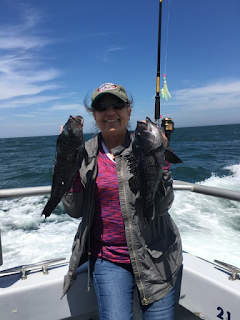 Fish Report 5/22/17
The Trouble With Wind
The Trouble With Data
..is big trouble for Fluke/Flounder & Sea Bass
THIS REPORT CONTAINS IMPORTANT INFORMATION FOR ANYONE WHO WANTS TO FIGHT BAD FISHING REGULATIONS (from Texas to Maine.)
Special Long Cbass Trip - Tuesday, May 30th - $125 - 6:30 to 3:30 - Long range forecast has it as a nice day..
Also have room for regular trips Memorial Weekend Sunday & Monday..
Sailing Daily For Sea Bass Weather Permitting - Saturdays 6:30 to 3:30 @ $125.00 -- rest of the week 7 to 3 at $110.00.
Lots of Limits so far..
Look forward to fishing every day possible (and hasn't THAT been challenging..)
Reservations Required at 410 520 2076 - LEAVE YOUR BEST POSSIBLE CONTACT NUMBER - Weather Cancelations Are Common - I Make Every Attempt To Let Clients Sleep In If The Weather's Not Going Our Way..
Be a half hour early! We always leave early!
..except when someone shows up right on time.
Clients arriving late will see the west end of an east bound boat. With a limited number of reserved spots, I do not refund because you over-slept or had a flat..
Bonine Is Cheap Insurance! Crystalized Ginger Works Too. It's Simple To Prevent Motion Sickness, Difficult To Cure.  If You Suffer Mal-de-Mer In A Car You Should Experiment On Shorter Half-Day Trips First! (Wockenfuss Candies sells crystalized ginger locally - We usually have some aboard - Better is Nuts.Com.. Chewable Meclizine is a good pharmaceutical, chewable Bonine's  a "less drowsy" meclizine pill; prescription Scopolamine Patches are the gold standard.)
Bring A Cooler With Ice For Your Fish – A 48 Quart Is Fine For A Few People.
No Galley! BYO Sandwiches & Soft Drinks. A few beers in cans is fine. (bottles break at bad times)
If You Won't Measure & Count Your Fish The State Will Provide A Man With A Gun To Do It For You. We Measure & Count — ALWAYS — No Exceptions!
Please Support the Ocean City Reef Foundation!
http://www.ocreefs.org
We're Nowhere Near Reef Building's True Potential.
If you know anyone with pallets of unsalable block, I know a fishy place or two we can store them. Forever. Will pay for trucking.
If you have a few blocks in the backyard taking up space and just making snake reef, bring em. We'll toss em overboard with the rest.
17,491 Reef Blocks deployed at numerous sites: TNC's Restoration Reef 278 - Doug Ake's Reef 3,238 - St. Ann's 1,600 - Al Giles/OC RUST Reef 1,260 - Eagle Scout Reef 934 - Sue's Block Drop 277 - Nichols' Concrete 882 - Capt. Bob's Block Drop 676 - Benelli Reef 341 - Capt. Bob's Reef 423 - Wolf & Daughters Reef 210

Cool Hand Luke Lives Up To His Nickname With A Limit