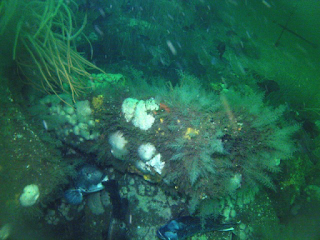 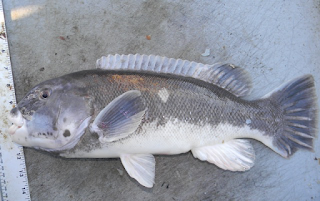 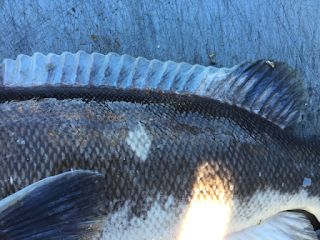 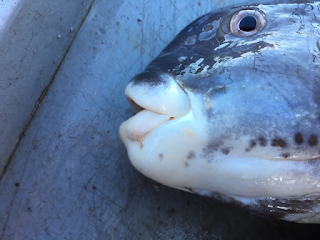 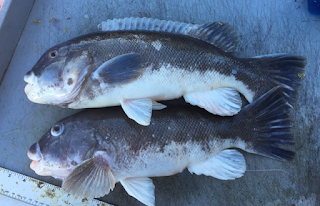 I think these rocks, a tiny patch of them, fell off a barge in heavy weather some 3 decades ago. Then again, they may have fallen from an iceberg a heck of a lot longer back. Here you can especially see a tog in his habitat. This same reef is shown briefly in one of my videos at 50 seconds & again for a lot longer at 6:02.. https://www.youtube.com/watch?v=n77WF9XQRJM
On first seeing our reef habitat (with a borrowed u/w camera & a $99.00 Walmart TV) I thought it so simple: if I could identify Essential Fish Habitat, the law would require NOAA to Protect, Preserve, & Enhance it. All I had to do was show them.
That first video was sent in 2001.. Instead: "Ignore" seems to suit NOAA just fine.
More & more of us are not ignoring seafloor habitat. There's a lot going on at the Reef Foundation. Charts will be in print any moment. Usually they'd have been done a while back, but this year I did a lot of side-scan sonar work inshore -- really tightened up the bearings on a lot of reef. A much better chart, but later than anticipated because of my many changes. I'm having to apologize to pre-paid donors several times a week, daily even, for tardiness.
Their wait will have been worth it.
Sending out our spring fundraiser soon too, plus have our spring dinner coming up. I have high hopes! I think this will be the year history eventually recognizes "Mid-Atlantic Marine Reef Restoration" was begun..
Getting bids on bargeloads of boulder. The Nature Conservancy, CCA, & OCRF are on board to build a "Sea Whip Meadow" reef restoration at the Bass Grounds some eight miles ESE Ocean City, Maryland.
Up until the early/mid 1970s a partyboat could run out to the Bass Grounds with what we call "lifeboat navigation" - the rudimentary course/speed/time navigation of yesteryear. Instead of our amazingly accurate GPS satellite navigation & chart plotters; instead of even loran - they found fish over exquisite habitat with a watch & compass.
Because the Bass Grounds was exactly that--where sea bass were caught--and because it was huge; early skippers did not require pinpoint navigation to find fish.
Then, with no more evil intent than early American settlers clearing forest to make pasture land or tillable field; hydraulic surf clammers, their fleet growing in number, discovered huge expanses of surf-clam beds in the late 1950s around those soft corals--that sea whip..
Tow after tow, impact after impact, month after month, year after year; in a couple decades the Bass Grounds became a memory.
Square miles of reef were ground to fine sand with only a few tiny patches of substrate remaining.
NOAA might eventually fasten their teeth into nearshore temperate reef. Be a great day for fisheries restorations.
Until then, our mighty government ocean agency, so tightly focused on catch-restriction as a singularly important tool in fisheries management; NOAA will forever be no more effective than the quality of their recreational catch data.
Early Greeks predicted outcomes by how cockbirds pecked their food; tea leaves prognosticate & even today some believe; casting the bones, water gazing, ouija board, even where first scrawling on bones and watching where they break, humans have long wanted to believe in 'a sign.'
NOAA's use of (and forcing all of management to use) MRIP catch estimates is no different. Their modern day catch estimates are so bad it's even less effective than when smoke filled teepees & peyote induced visions guided Native American's future. At least those tribal elders were allowed to use what common sense they possessed even in a drugged state..
In our time, where NOAA has scientific statistics (their claim) showing NY private boats, most quite trailerable and from just one state; where managers MUST behave as though NY's small boats (alone) outfished all US Commercial & Party/Charter from Hatteras to Canada, & even caught more sea bass in Nov/Dec 2016 than in all the years combined clear to the very beginning of recreational catch estimates..
No, I don't think fellows stumbling out of tent flaps would have tried to foist the likes of that rubbish on their people.
NOAA: Use the data we provide -- Or Else.
Habitat means nothing when you know overfishing is being driven by small plastic boats no one can even see on the water. Biology & Ecology need play no role in fisheries management of important marine species----We Have Catch Restriction.
It's a system badly in need of overhaul.
It can't happen soon enough.
Below is a post I made on FaceBook about sexing tog & other aspects of the tog fishery.
Regards,
Monty
Capt. Monty Hawkins
capt.montyhawkins@gmail.com
Partyboat Morning Star
http://morningstarfishing.com
Ocean City, MD
FaceBook 4/16/17 - Easter Sunday:

I'm often asked how to tell Male from Female in tautog/blackfish. Dedicated tog fishers suppose it's better to take males & leave females. Given what I know about tog, I believe that's true -- at least to a point. Probably best to release some big males too..
Because we sometimes find an inordinate amount of male tog over a structure/reef/wreck with very few females; and, as Big Sam Beauchamp, (the most dedicated tog fisherman I ever knew,) noted to me years ago; where there are very large male tog, there are never these inordinate numbers of smaller males with very few females: it appears, therefore, that male tog are territorial with a "bull & harem" spawning behavior.
Do the biggest bull tog run off the little rats? Seems so..
Some great science wiating to happen there.

Then too, because our region's tautog are shown to be virtually stationary/non-migratory - and have even stayed on new/different structure when I've tagged & moved them from another reef for the purpose of studying habitat fidelity: because of this extreme habitat fidelity tautog would make an excellent choice for put & take hatchery work with a university or state program. Anglers & ecosystems would benefit where the work was done & not hundreds or a few miles away.
If I'm correct about the fidelity I've observed from tag returns; a municipality, city, county, or state could 'stock' a jetty or other nearshore area and boost angler success with absolutely no harm to the natural population.

Back to sexing tautog.. Males have a greyish cast above and a fairly clean lateral line with white below. They'll often have a white 'dot' midway in the flank. Sometimes there are two or even three dots. And sometimes no such mark is evident. (see pic)
Male tog also have a squared-off chin. It can jut out further than the mouth in the largest bulls.
Females have a brownish mottled/camouflaged cast all over with no well-defined lateral line. Their chin is a slightly curved slope from the pelvic fins up to the lower lip..

Unlike most fisheries, what we take today will influence the fishery 15 & 20 years from now. By building lots of habitat & allowing as much spawning as possible, it's certainly conceivable our best tog fishing lies in the future
..but that's a mighty high hurdle.
Regards,
Monty