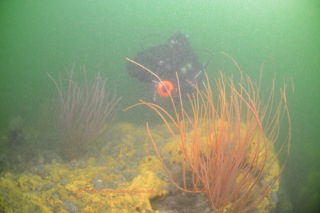 Fish Report 1/14/16
Sunday's Wind Eases
Big Restoration
All Winter Trips Posted Via Email. There's just no use trying to go everyday in winter. Life Goes On..
Adding Sunday, Jan 17th - Tog Trip - 6:30 to 3:30 - $125.00 - 16 Anglers Sells Out
Not Fishing After Sunday Until The Next Announcement.
My Crew Have White Crabs For Sale AT THE DOCK for the low, low price of just $5.00 per generous dozen. There Is No Guarantee We'll Have Whites For Any Trip. Sometimes they all die. That shrinkage is why I prefer greens. We may be bringing some whites with us in the ocean. Green Crabs (not Whites!) Remain Provided As Boat Bait And Are Included In All Fares.
Skunks are always possible while tog fishing.
Really. It's a frequent occurrence, even with a good bite. Not an easy fishery; the very best toggers sometimes get their head handed to them despite folks all around having done well.
Then too, sometimes the whole boat can do very poorly.
If you can't take the heat, and there ain't much of that either, stay out of the kitchen.
Going Toggin Anyway! Tog Only, Sea Bass Are Closed Because NOAA Has Absolutely No Real Idea How Best To Manage The Fishery.
No Live Tog Leave The Boat - Dead & Bled - Period. (I Believe The Live Tog Black Market Has Hurt This Fishery ..But Nowhere Near As Much As Bad Sea Bass Regulations)
Agreed With Or Not, All Regulations Observed – Maryland: 4 Tog @ 16 Inches
If You Won't Measure & Count Your Fish, The State Will Provide A Man With A Gun To Do It For You. We Measure & Count — ALWAYS — No Exceptions!
Reservations Required at 410 520 2076 - On My Rig You Can Reserve What Spot You're In. Please See http://morningstarfishing.com For How The Rail's Laid Out..
LEAVE YOUR BEST POSSIBLE CONTACT NUMBER - Weather Cancelations Happen - I Make Every Attempt To Let Clients Sleep In If The Weather's Not Going Our Way..
Be a half hour early! We always leave early!
..except when someone shows up right on time.
Clients arriving late will see the west end of an east bound boat. With a limited number of reserved spots, I do not refund because you over-slept or had a flat..
Dramamine Is Cheap Insurance! (Meclizine's Better!) Crystalized Ginger Works Great Too. It's Simple To Prevent Motion Sickness, Difficult To Cure.
Honestly - If you get to go on the ocean once month, once a year, or even less; why risk chumming all day? Similarly, if you howl at the moon all night, chances are good you'll howl into a bucket all day.
Bring A Cooler With Ice For Your Fish – A 48 Quart Cooler Is Fine For A Few People. Do Not Bring A Very Large Cooler. We DO have a few loaners - you'll still need ice.
No Galley! Bring Food & Beverages To Suit. A few beers in cans is fine for the ride home.
Now Out Of Block - Rats! Working On More.. Will Accept Even Small Donations Of A Few Blocks You Have Cluttering Up The Yard..
12,593 Reef Blocks Deployed at numerous sites. Active presently are Doug Ake's Reef with 2,394 - St. Ann's 1,459 - Al Giles Barge 653 - Eagle Scout Reef 756 - Sue's Drifting Easy Reef 147 - Nichols' Concrete 540 - Upside Down Tank 132
Please Support the Ocean City Reef Foundation!
http://www.ocreefs.org
We're Nowhere Near Reef Building's True Potential.
Thank You!

Every Splash Makes Fishing Better..
Greetings All,
Adding Sunday to the trip list. Weather man's cutting us a little break.
Been plenty warm so far this winter; water temp's fine. Windy...
Thursday's inshore trip ended with quite a few limits (10 angler trip) & many female releases.
Working with two big names in conservation on a sea bass habitat grant. Big pot of money in my world.
Applying for a grant is something I've rarely been successful at. Maybe too honest?
If you think fishermen stretch the truth, you ought to see some of the numbers getting thrown around in grant proposals. . .
Readers already know I believe we need to understand how much habitat's been lost -and where- before we can undertake an actual "restoration."
If a mansion burns to the ground and we pitch a pup-tent next county over, is that a home restoration?
Pretty sure that's where we're at with Mid-Atlantic seafloor habitat now.
Everyone seems to get the sea-grass (SAV) & oyster thing in estuaries. Seafloor off here is, and I quote, "sand & mud."
Actually, I'm not so sure our 'recreational angling community' really get the estuarine stuff either.
Promise: The better habitat gets, the more fish populations will have room to grow.
Have a fishing area off the coast called the Bass Grounds. I've been told skippers of yesteryear rarely had to anchor to catch sea bass, it was a drift fishery.
By contrast, most of my sea bass trips over three and a half decades, including those with Capt. Orlando Bunting, have been at anchor. Not all, but most.
I have friends who fished for marlin at the Bass Grounds too. One won the big Marlin Club tournament in 1958 I believe it was..
When I was 19 I was sent to the "Tackle Shop" on a windy day to "Get A Book Of Hooks."
No, old Capt Orie Bunting wasn't fooling his bookkeeper when he sent me out for vodka. When I came back, another old skipper & Capt. Orie were in a mood to tell tales. They told me about when the African Queen sank, other boating accidents important in local lore.. The other skipper told me something too I'll never forget: "We had the best sea bassing on the coast, and we let them destroy it."
I knew he was talking about the Bass Grounds (AKA 1st Lump) & hydraulic clam boats, but it would be a long while before underwater video allowed me a better idea what had happened. It's happened to me too, I've witnessed several pieces of reef bottom lost to gear impacts; but never in such grand scale as these old timers must have seen..
Wasn't too many years after getting that 'box of hooks' when that other old skipper took a walk in the woods back behind his house. He sat down by a tree with a shotgun & never came home.
Gonna put that reef back.
Not a new idea. Been working on it.
See email from 2001 below..
Regards,
Monty
Capt. Monty Hawkins
capt.montyhawkins@gmail.com
Partyboat Morning Star
http://morningstarfishing.com
Ocean City, MD
*************
From: mhawkins@siteone.netTo: (Not Nearly As Many People As Today..)Subject: 1st Lump Restoration ProjectDate: Tue, 13 Nov 2001 21:26:34 -0500
Begins Today! 11/14/01
Scheduling and weather finally allow the first of many runs this winter for the Titan America. Towing the Apple Marine barge she will be departing the by dock mid-morning, weather permitting, with a load of sectional barges donated by McGinty Marine. Estimated time of sinking is 11:00 to 2:00 at the NW edge of the Bass Grounds Reef Site.
Look for lots of materiel at this site this winter, predominantly concrete pipe.
If the ocean is as calm as it was today, perhaps some of you can zip out there and get some pictures!
Monty
Posted by Monty at Thursday, January 14, 2016