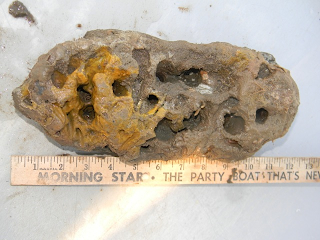 Fish Report 2/4/15
Going Toggin In Cold Water: I Do Not Expect Epic Angling
Opening First Two Weeks Of Sea Bass To Reservations
NEFMC Habitat: The Condensed Version
New York Reef Foundation
Opening Reservations For First Two Weeks Of Sea Bass Season. May 15th, 16th & 17th - Long Cbass - 6AM to 3:30PM - $125.00 - Thereafter Regular $110.00 Trips With Saturdays As Long Trips. These Trips Are Non-Refundable. Reschedule? Yes: Owing To Weather. Refund? NOPE. (That's the rules for the first two weeks.. Has to do more with credit card policy than how I'd prefer to run my business.)
Skunks are always possible while tog fishing.
Really. It's a frequent occurrence, even with a good bite. Not an easy fishery; the very best toggers sometimes get their head handed to them despite folks all around having done well.
Then too, sometimes the whole boat can do very poorly.
If you can't take the heat, and there ain't much of that either, stay out of the kitchen.
But If That Sounds Like Your Kind Of Fishing, Good! Cause We're Going Toggin Anyway! Tog Only, Sea Bass Closed.
X-Tra Long Tog Trips - Saturday & Sunday  February 7th & 8th - 5AM to 5PM(ish..) - Very Long Ride - Higher You Reach, Harder You Fall ..But Sometimes It Works. $175.00 - 16 Sells Out.
Have White Crabs For Sale AT THE DOCK for the low, low price of just $5.00 per generous dozen. (they're small) There Is No Guarantee We'll Have Whites For Any Trip. Sometimes they all die. That shrinkage is why I prefer greens. We will not be bringing whites with us in the ocean. Green Crabs Remain Provided As Boat Bait.
Reservations Required for All Trips.
Reservations at 410 - 520 - 2076 — They Answer 24/7.
LEAVE YOUR BEST POSSIBLE CONTACT NUMBER - Weather Cancelations Are Common - I Make Every Attempt To Let Clients Sleep In If The Weather's Not Going Our Way..
We provide green crabs. You're welcome to bring any kind of crab you like – even lobster, even plastic.

If You Book — BE SURE TO LEAVE A GOOD CONTACT NUMBER & DON'T TURN YOUR PHONE OFF!

In the ocean I think the rock in this picture is our #1 missing habitat. It's a soft sandstone easily broken by hand and then crumbled into sand. As you can see, it's easily burrowed. I've found as many as 5 white-leg crabs (rock crab) in a single burrow.

In the Gulf of Maine they call this soft rock, "Pipe Clay." I've not held hundreds of pieces and certainly can't refer to a body of literature, but up north they have examples of pipe clays with tree-trunk sized holes ..and, I understand, they too have large areas of pipe clay habitat that's gone missing.

Given that you can crumble this rock in your hand, when many-ton hydraulic clam dredges and trawls w/o cookies were towed across once-large areas of reef in the 1950s, 60s & 70s, the cumulative impact over decades was a now-smooth, reef free bottom.

Trawl skippers would say, "We cleaned that bottom up." They mean it too.

Many men once fished multi-square mile reefs without aid of precise electronic navigation. Now satellite navigation is a requirement for the few men who fish today's much smaller reefs.

2,000 page documents are useless for restoration unless we embed them in cement & toss them overboard.

So far as I know, we haven't even one page for the Mid-Atlantic. It's "all sand & mud."

Catch restriction has to carry the fight or we'll lose. At the rate sea bass season is evaporating in regulation's heat, I'm afraid we will lose.

Guys up in New York are especially behind the curve. The State of New York gives all their reef material away.

If the Tappan Zee Bridge falls and no NY reef is built, I hope it's not because good men remained silent.

There's a new thread at Fishing United about NY reef building's potential. Should the New York Reef Foundation be formed, I'll buy the first T-shirt. A ceramic coffee mug too.

Meanwhile, I'm working every day toward fishery restoration based on real results from real habitat.

It's the only thing I've ever seen that actually worked.