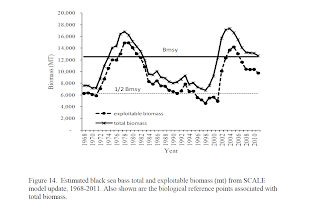 From: Monty Hawkins <mhawkins@siteone.net>
Date: Tuesday, December 17, 2013 9:46 AM
To: (lots of management)
Subject: Witnesses To The Fishery
Good Folks,
I assert enormous errors exist in the recreational catch estimate centerpoints & that the new and improved estimating system can be neither while managers use only that single centerpoint number.
Because we witness the black sea bass fishery at sea & have contacts everywhere watching fish cleaning stands; Because we see exactly how many boats are fishing our reefs & often know the operators—even on private craft; Because we know what they're fishing for and generally how well they catch: When NOAA asserts NY's private boats caught many, many times what the for-hire fleet caught; When catch estimates confront reality in a wholly unscientific way, When NOAA stands by assertions of "Best Available Science" when the centerpoint of an estimate isn't remotely true: In the eyes of fishing's witnesses NOAA has abandoned honest & sincere science in favor of a regulatory baseball bat.
Its very doubtful NY's private boats caught on par with the for-hire fleet. Its far more likely recreational skippers caught less. Yet the estimate's wave 4 centerpoint has private boats catching 21.4 times more sea bass than NY's for-hire skippers..
That one centerpoint estimate becomes a hard number for a substantial portion of the Mid-Atlantic's recreational sea bass quota.
It's Wrong.
Wave 5 estimates have now come out.
Because the system will hungrily consume whatever numbers it is fed, Is forever in need of fresh data; We shall now lose even more of our sea bass season
..and be no closer to a true path of fishery management.
You must be persuaded that rational systems of punishment & reward must be founded upon reasonably accurate estimates.
To be punished with further catch restriction when real catch & effort are at incredible all-time lows could only be a result of bad data.
Black sea bass are perhaps the simplest marine fish to manage: Building & protecting habitat (even if by accident as in the late 1990s) while forcing them to spawn young has already proven to create astronomical stock growth. Incorporating a lighter touch of catch restriction while mindful of the species affinity for short winter migration with a return to the exact same spawning reef would allow an even greater population expansion: By regulating the prevention of over-harvest in any one region's stock, management could create a truly resilient fishery.
Instead, owing from management's constant exertion of greater & greater regulatory restriction in response to catch-estimates long parted from science's demand for observable, testable averments; indeed, long parted from Popp's test of falsifiability, we are now at a place where a simple fishery is propped-up only by  relentlessly more restrictive regulation.
Where does the buck stop? Who has the ability to put a stop to recreational regulation based primarily from the centerpoint of incredibly broad catch estimates?
Stop the pain. Turn U.S. Fisheries toward science-based restoration & away from misusing estimates.
Regards,
Monty
Capt. Monty Hawkins
mhawkins@siteone.net
Partyboat Morning Star
http://morningstarfishing.com
Ocean City, MD
And Snailmail..

The recreational black sea bass fishery has been under constant assault from bad catch estimates for the last several years.  NOAA & NMFS were supposed to repair recreational catch estimating methods and claims to have done so; yet the estimates grow worse – would be laughable were they not so painful.

Under the guise of “best available science” these estimates camouflage the true ills of our temperate reef fishery.

At the problem’s core is using a statistical spread incorrectly. Because the true and correct answer to “How Many Fish Did They Catch” is anywhere in a broad statistical spread, yet managers will use only the centerpoint; compliance with fish quota regulation becomes not a matter of fact, but a wild & random guess.

Once ‘overfishing’ or ‘overquota’ has been asserted by the estimating system, managers have no choice but to further restrict catch.

We know our fishery. This specific problem is MRIP’s assertion NY private boats caught 21.6 times what the party/charter skippers landed.

Yet fishers are more inclined to believe private boats would have landed fewer sea bass..

Use of bad estimates is destroying the recreational sea bass fishery & doing so with no benefit to the fish.

This situation is far deeper than a simple letter can detail. It will absolutely require a firm hand from the highest of levels.

I hope that’s you.